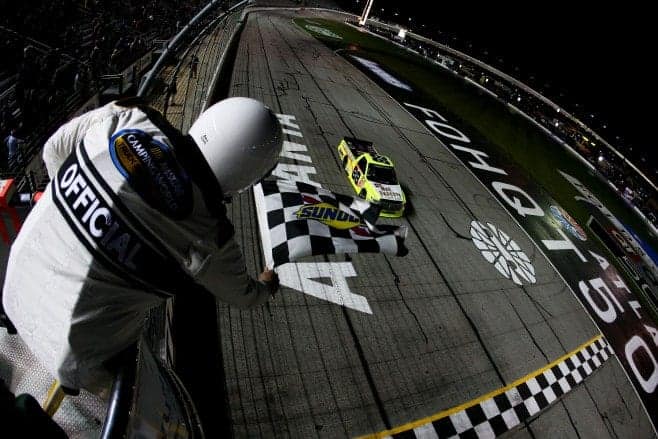 Matt Crafton won Saturday night’s Camping World Truck Series race in dominating fashion, leading 85 of the 130 laps en route to the victory. Crafton, a week after making his Sprint Cup Series debut as a substitute driver for the injured Kyle Busch, won the second race of the season for the second year in a row.

“This Menard’s Toyota Tundra was fast, fast,” said Crafton in Victory Lane. “I was really disappointed in qualifying but it didn’t have a whole lot of single-lap speed by itself. But I knew once the green flag dropped and it ran three laps, I’m like, ‘We’ve got something for these boys here. They’re in trouble, I think.’”

Saturday night’s event was the first Camping World Truck Series race held at Atlanta Motor Speedway since 2012 and the first time since 2011 that the second race of the CWTS followed the weekend immediately after the season opener.

Ty Dillon finished second behind Crafton, followed by pole-sitter Ben Kennedy, Daniel Suarez and Tyler Reddick to round out the top five.

Other than Crafton, only Sprint Cup Series regular Brad Keselowski and Erik Jones were able to lead multiple laps.

Keselowski, who started 10th, was able to lead six laps after opting not to pit during the second caution flag of the day. After the restart, he quickly fell back to the 10th position. Keselowski decided to head to pit road under green due to the handling of his truck, which cost him track position. He was then penalized for driving through too many pit boxes after exiting his stall and the penalty trapped Keselowski three laps down. He was never able to fully recover and he finished 15th, one lap down. Keselowski was originally going to be the pole-sitter of the race, but his time was disallowed after NASCAR determined he had not taken the green flag in qualifying before the timer ran out.

Meanwhile, Jones was able to finish in the seventh position. He slid through his pit box twice over the course of the night and didn’t have enough time at the end of the race to catch Crafton or the other leaders.

Kennedy and Suarez were able to lead one lap apiece.

The field was slowed three times for a total of 13 caution laps. The final 74 laps of the race went caution-free, the longest green flag stretch in a Truck Series race at Atlanta Motor Speedway.

With the win, Crafton moved up three positions in the points standings and now sits second, two points behind leader Reddick.

The Truck Series will not race again until March 28th when the series heads to Martinsville Speedway for the Kroger 250. Coverage begins at 2:30PM ET on Fox Sports 1.