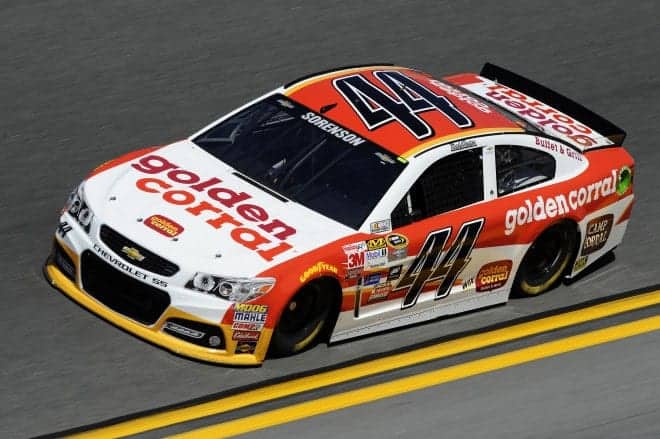 Some unusual news  came out of Atlanta on Friday morning.  According to USA Today, thieves descended upon the Drury Inn in Morrow, Ga., where Team Xtreme Racing’s team members were staying in anticipation of getting out on track early Friday morning.  The thieves broke into and absconded with a 2004 Ford F-350 dually pulling an enclosed trailer.

Inside that trailer is the No. 44 Chevrolet that Travis Kvapil was planning to attempt to qualify for Sunday’s QuikTrip Folds of Honor 500 Friday evening.  The team’s transporter is already at Atlanta Motor Speedway, but the team brought the race car to Atlanta separately.

According to the Morrow Police Department’s police report, Team Xtreme Racing estimates the stolen goods as worth at least $367,500.  The car itself is worth $250,000.

According to a Twitter post from ESPN.com’s Bob Pockrass, Team Xtreme Racing owner Jonathan Cohen has stated that the team will be forced to withdraw from this weekend’s activities due to the theft.  However, the team does have a car to take to Las Vegas and still plans to compete next weekend.

Xtreme owner John Cohen says the team will have to withdraw. Does have cars that can go to Vegas. #nascar

On Saturday morning, the stolen car was recovered by police in the Gwinnett County town of Loganville, due east of Atlanta.  The thieves had simply dumped the Chevrolet SS on the side of the road once they realized what was part of the loot.

Lost and Found section of the road. pic.twitter.com/L3cEdi9o0R

Once Cohen verified that the car was in fact the stolen Chevrolet SS, it was hauled back to North Carolina on a rollback.  It was delivered to the shop without a scratch.  The team plans to attempt next weekend’s Kobalt Tools 400 at Las Vegas Motor Speedway with the same car.

The dually truck was found in Stockbridge, Ga., which is just southeast of Morrow, on Saturday afternoon.  According to the Associated Press, the truck had a busted drivers door handle and a jimmied ignition from the break-in.  The trailer and its contents have yet to be found.  However, Sergeant Larry Oglesby of the Morrow Police Department told the AP that they have a person of interest in the case that they are actively looking for.

We will continue to follow the story as it continues to develop over the next few days.