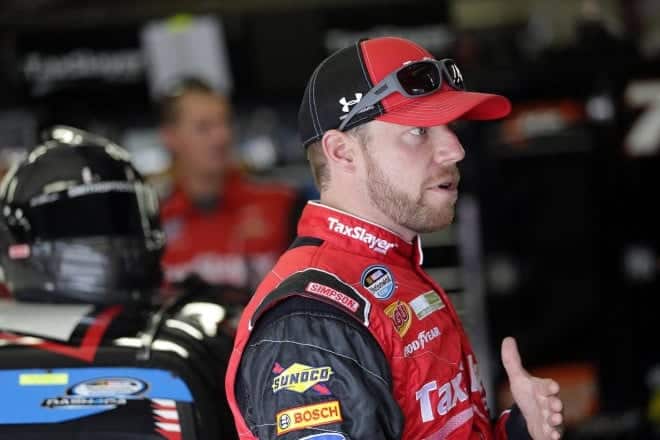 In the wake of Kurt Busch‘s suspension, Regan Smith has been tapped to replace him in the No. 41 Haas Automation Chevrolet for Sunday’s Daytona 500. The announcement, made late Friday night pairs Smith back up with the Stewart-Haas Racing organization he drove for in the wake of Tony Stewart‘s leave of absence last summer.

“I believe the team had a plan in place,” he said. “I’ve got nothing to lose in this race other than to go out and run as hard as I can.”

Smith, who runs full-time in the XFINITY Series for JR Motorsports, is filling in on a one-race deal. The 2008 Sprint Cup Rookie of the Year has one victory in 172 Cup starts, the 2011 Southern 500, and has two career top-10 finishes at Daytona. Smith, who subbed for SHR last August when Stewart was forced to miss Watkins Glen, has done some high-profile fill-in work; he also took Dale Earnhardt, Jr.‘s Cup seat in 2013 when NASCAR’s Most Popular Driver was working through his concussion issues.

Smith, who was seventh in the 2013 edition of the Daytona 500, will have to start at the rear of the field for this one due to the driver change. Introduced at a Saturday morning press conference, SHR confirmed him as the driver for Sunday’s race even if Busch wins his appeal. Busch met with a three-member NASCAR panel this morning in Daytona Beach to determine his fate.

“Kurt Busch is the leader of this team,” Smith emphasized this morning, and said he was open to talking to the driver even though they hadn’t spoken. “He is the driver of the No. 41 car and I’d expect he’d help any way he can.”

Chevrolet, SHR’s manufacturer, officially cut ties with Busch Friday night. The future of the No. 41 team beyond Daytona remains unclear, although Smith could be a candidate to inherit the ride full-time if Busch is released.

If Chevy has cut ties with Busch I would highly doubt that you will see him back in the 41 anytime soon. As we have seen over the years sponsors can make or break a driver. This incident; regardless of whether any of us think Busch or Driscoll is right or wrong, could spell the end for Busch in the NASCAR series if sponsors deem him as “damaged goods” for future sponsorship.

Think you are right ! Afraid right or wrong Kurt career is down the tubes !