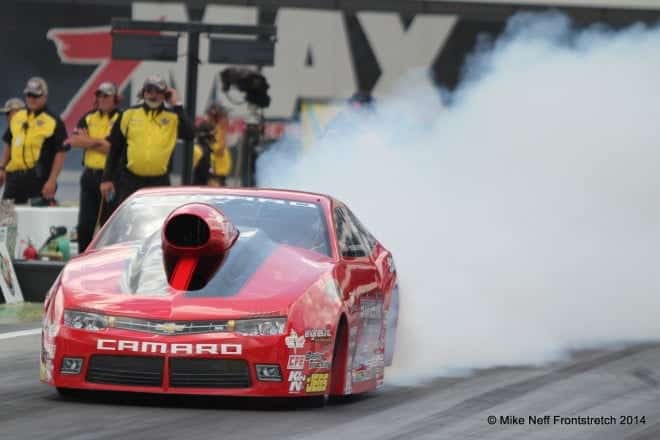 Frontstretch is pleased to announce our expanded NHRA coverage for 2015 and as part of it, our new Nitro Shots weekly column. Check back every Thursday throughout the season for a new edition. Whether you are a longtime NHRA fan looking for a midweek drag racing fix or a newcomer who is just considering checking it out, we hope you will find something that appeals to you. Let us know what you think!

Elite Motorsports team owner Richard Freeman confirmed last week that he does not have the funding to run defending Pro Stock World Champion Erica Enders-Stevens for a full season. Freeman noted it takes about $1.5-2 million per year to fully fund a car and he has about $1.2 million right now. While he’s gotten lots of messages of congratulations, he says he hasn’t had anyone offer to write him any checks. Enders-Stevens did not run a full season last year either, missing two races of the Western Swing in Seattle and Sonoma.

How can this be? This is a defending champion! When put to the fans on social media, a whole host of theories sprang forth. Some feel it’s because she is a woman and to be fair, it’s always seemed that women struggle even more than men finding sponsors, no matter how great their on-track performance, particularly if they aren’t willing to pose in a string bikini.

Other theories ranged from blaming NHRA for ruining the sport via rules, regulations, and the Countdown (sanctioning bodies for any sport and their policies are not always popular with fans), to poor television coverage with ESPN making it too difficult to find the programs and not showing enough live racing, to not enough return on investment for sponsors due to both the television coverage and poor turnout in the grandstands, to rising expenses to run the teams and cars, which also goes back to return on investment, to too many big teams taking over and ruining the sport.

The interesting part of all this is that you could have easily taken almost all of the comments and theories, run a “find and replace” and removed NHRA and filled in NASCAR or IndyCar, and it still would have worked because it is the exact same conversation that has been had across the motorsports spectrum for years.

Food for thought, folks. If all of big-time motorsports are facing the same issues, what’s the solution?

*NHRA took a stand against the popular Discovery Channel reality series Street Outlaws, sending NHRA licensed drivers who have appeared on the show, which apparently includes a number of the regular cast members, a letter warning that further participation on the show could result in suspension of their NHRA licenses. Cast members of the show shared the letter via their social media accounts on Tuesday night.

The action makes good sense on the part of NHRA, an organization formed to offer an alternative to the dangerous and illegal practice of street racing. According to a story posted on Hot Rod Network, the NHRA was particularly concerned by competitors appearing with cars that clearly had NHRA decals and numbers displayed. Sanctioning the action on the show, whether the “street races” are staged or not, goes against the mission of the NHRA, because it still glorifies illegal street racing. However, it didn’t play well from a public relations standpoint in the social media sphere, at least initially, for a sanctioning body that (as noted above) like many of its motorsports counterparts, struggles with its public image as big business that doesn’t care about the little guy.

Street Outlaws averages around 2 million viewers to 500,000 for NHRA race broadcasts, but NHRA officials deny the ratings difference had anything to do with the letters.

*Antron Brown will debut a new paint scheme for 2015 on his Matco Tools dragster this weekend in Phoenix that will feature the names of more than 1,450 Matco Tools distributors who will ride with him throughout the season. Brown unveiled the car this past Sunday at the annual Matco Tools Expo’s National Business Conference in Orlando.

Matco did a similar theme last October for Breast Cancer Awareness featuring the names of over 1300 cancer survivors that was so popular, the sponsor decided to continue the theme in an effort to recognize its distributors.

From Alexis DeJoria, who scored her first career victory in Funny Car competition last year in Phoenix: “My favorite memory would have to be after my final run when I won, all the guys were so excited and they jumped into our van and raced down the return road to come meet me. Well, they forgot Jesse (James, her husband) was standing in the doorway of the van hanging on to the outside. They took a corner really fast, and as soon as they turned the corner, he tumbled right out of the van as they were driving! He got cut up pretty good, but he put some duct tape on it and was good to go.”

Driver of the Week: Shawn Langdon

Some Things Most People Don’t Know About Shawn: Was also a standout baseball player in high school but chose racing over college baseball scholarship offers; Langdon made the quickest ever pass in Top Fuel with his 3.700 run at Pomona a couple of weeks ago, but does not hold the national record because he was unable to backup his quick time. He also owns the fastest run ever with the 334.15 mph run at Reading, but does not have the speed record either for the exact same reason. He was unable to back up the run during that race weekend either.

“Going on into Phoenix, we have to keep the momentum going and keep plugging away with what we’re doing,” he said. “The car is responding well. We’re still working on sponsorship to fund the car through the 2015 season. We’re hard at work trying to get the race car running well and running consistently, but we’re also hard at work trying to get sponsorship lined up for the season.”

Langdon, another former series champion with a top flight team, does not have any sponsorship lined up beyond this weekend at this point. The team notes subsequent races will be determined based upon sponsor acquisition.

Last week this section covered the process for setting a new national record because it directly related to action from Pomona. The plan for this week was to cover redlighting and the tree, because that subject also had some bearing on events at the Winternationals. In the meantime, though, there was some reader feedback that made it apparent that it might be a good idea to back up a little bit first. Ultimately the goal of this section is to teach readers about NHRA drag racing and that means all of them, including those who have never seen it. Redlighting, the tree, hole shot wins and all of those good things will come later. While this might seem pretty basic for the longtime fan, the reader asked about the cars, specifically, in response to our Courtney Force driver profile, what is a Funny Car and why is it called a Funny Car? It seems that a few weeks covering the cars themselves might be helpful.

The graphic below, provided courtesy of the NHRA, can help out with an overview of what a Funny Car looks like and some of the basics on the technical specifications. As to why they are called Funny Cars, that question is pretty interesting. The consensus is that no one actually knows who coined the term, but back in the 1960s, racers began to move the rear wheels up on stock muscle cars. They also increased the size of the rear tires. This was all done to aid in getting grip on the launch, but the resulting cars no longer looked quite stock. They looked “funny.” The term just stuck.

Now that you’ve seen the outside of a Funny Car, check out the inside of one and ride along with Ron Capps during the Circle K Winternationals from Pomona.

Number of the Week: 8

The number of wins for John Force at Wild Horse Pass Motorsports Park, site of this weekend’s CARQUEST Auto Parts NHRA Nationals. He has the most wins for any driver in the Mello Yello Series categories, although the last came 10 years ago in 2005.

I was at the 1966 SUPER STOCK Nationals held at Center Moriches on Long Island when the funny car movement was just getting started. (Still have some 8mm home movies of that event)
Watched as a plane landed on the track during pre-race, then took off again –
It was INDEED very weird to see those Super Stockers and FX’rs with the crazy looking altered wheelbases, — injector tubes sticking up thru the base of the windshields on top of the set back engines, roisen burnouts – – wheelstands – Jack Christenson’s “TOPLESS COMET” – – all the greats like Sox & Martin, Dick Landy etc – low budget guys like “Jakes Speed Shop” – I remember Al Joniac’s “BAT CAR” (Mustang I think) — losing the chute at the top end and burning out in the weeds – – The Hurst HEMI UNDER GLASS -did the wheels up BOTH WAYS up and back down the track – – – and – – of Course — Miss Hurst Golden Shifter – – Linda Vaughn –riding on the trunk of the Hurst Olds – – B-O-W-I-N-G to, and “WOWing” the fans !!!
That was my FIRST National event – – I seem to recall they were running in the high 9’s, or 10’s back then ?? ( I’m old so–)
But – I STILL love going to the track -especially the Nationals out at Norwalk in Ohio.
A FANTASTIC facility.

Thank you Ron, glad you are enjoying them!

Terms like ‘funny car’, ‘top fuel’, ‘late model’ and ‘modified’, ‘stock car’ are unique to American racing in that they made sense once but do not today. You won’t find a GT or ‘grand touring’ car in Europe that isn’t actually a grand touring car and a non-production car is correctly called a prototype. But in the US, you’ve got ‘stock’ cars that aren’t stock, ‘modifieds’ that make no sense since the ‘stock cars’ that were once supposed to be their strictly stock/non-modified counterparts, today have zero stock components and so on.

Apparently there was some consideration to changing the name of Funny Car to Fuel Coupe in the 80s or 90s, but it just didn’t fly. We tend to get entrenched in tradition, and yeah, sometimes the results are names that don’t make sense. Although you could still argue for Funny Cars I think because, going from the original logic, those are some really funny looking Camaros and Camrys. It’s the same as Indy. I get a chuckle every year about the terms “Gasoline Alley” and “Carburetion Day” (now officially known as Carb Day) given that the cars haven’t used gasoline or carburetors in ages.

Toni, I just wanted to say thank you for your coverage of the NHRA on Frontstretch.

Your welcome, Alex! Glad you are enjoying it!