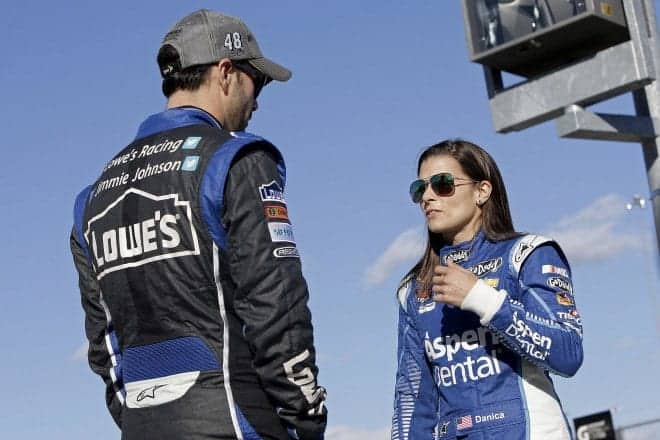 In a wild Budweiser Duel, Jimmie Johnson found the best way possible to keep away from the madness.

Stay out in front of it.

Leading 40 of 62 laps, Johnson survived a green-white-checkered finish and completed a Hendrick Motorsports sweep of Thursday’s Budweiser Duels. Already qualified on the outside of the front row, Johnson will be part of a 1-2-3 march to the green flag for an HMS program searching for its third straight Daytona 500 victory.

The race itself was dominated by Johnson and the Joe Gibbs Racing duo of Carl Edwards and Kyle Busch. Combined, they led all 62 circuits as most of the action occurred in three-wide racing and wrecks behind them. Edwards and Busch put pressure on down the stretch, but an inability for the duo to pair up and worked together haunted them a bit in crunch time. Both also suffered from pit road problems; Edwards overshot his pits on a stop while Busch wound up getting caught for speeding.

Greg Biffle wound up fourth in the race while Martin Truex, Jr. rounded out the top 5, posting his second straight strong performance of Speedweeks. The second five was filled with four underdogs and the race’s other big story: Ryan Blaney, Reed Sorenson, Mike Wallace, Justin Allgaier and Danica Patrick.

Patrick, who was in danger of missing the Daytona 500 at times during the race, got involved in a wreck with Denny Hamlin. The final caution, setting up a green-white-checkered finish caused Patrick’s frustration to boil over, leading to a heated post-race conversation that eventually involved Tony Stewart. Stewart, teammate Kurt Busch and others eventually helped separate the two although no punches or excessive physical contact was made.

“I try and treat everyone equal,” said Hamlin, who hit Danica’s rear bumper for the second time in two days. “I just can’t say it’s you, Danica, I need to stay two feet away because the car is loose.”

“I like Denny,” Patrick said. “We have motorhomes next to each other. This conversation will continue… we’re just not on the same page.”

Patrick, with help from Kurt Busch charged back up to 10th following the wreck despite major crash damage. Had she not finished in the top 16, the GoDaddy car would have been too low in the provisional standings to be eligible and failed to qualify.

Ryan Newman was 11th, followed by Kurt Busch, David Gilliland, David Ragan, Austin Dillon and Ricky Stenhouse, Jr. in 16th. Brian Scott missed passing Stenhouse by inches and, as a result failed to qualify for the 500 in his No. 62 Premium Motorsports car.

A big wreck midrace, triggered by sophomore Alex Bowman and rookie Jeb Burton took both those drivers out of the 500 as well. They join Josh Wise, Ron Hornaday and Justin Marks as the six drivers who failed to make the field for Sunday’s Great American Race.

I was one of the people at the end of last year who was not happy with the jubilation of the post race altercations. The “official” season hasn’t started yet and there seems to a highlight reels abound, I am not impressed or encouraged about this years racing. I hope I am wrong, but it seems a certain team is bound and determined to make a statement at the end of last year and now this starting season, and not with their racing. Why? The cynical side of me is saying BZF gave all sorts of encouragement in the wrong way. I don’t need to see a highlight reel after every race because feelings were hurt. I don’t know what the drama was tonight, I saw a car slow and a car with the momentum that was required “of racing” just could not slow up/stop in time..AGAIN AT THAT TIME, I don’t care what folks said about Hamlin and Danica before that incident. The media seems to be drooling over themselves to make a non story a story and like a dog with a bone are not letting it go and are carrying it over into other events, more so than usual. This seems by design and I feel sorry for the drivers that are doing what they are doing (racing and maybe it doesn’t always work out) and it seems that Brian was ecstatic over the nonsense of the end of last year and is looking for more highlight reels to be seen on Sports Center, the hell with the racing or product on the track. I am concerned, and not in a good way. I am seeing a nasty tone being set and it is offensive. My two cents.

The big takeaway I had from the 125’s was all the “lane blocking” done by the leaders. With the guys that ran up front, cooler heads prevailed in the qualifying races. But, who’s gonna be coolheaded in the last laps of the 500 when the leader keeps swooping lane to lane to block a run on him? I see an ugly finish coming and more post-race hijinks that kb has already pointed out that NASCAR seems to be hoping for.

Thanks Richie, that is what I am predicting will happen this weekend too. Ugh.