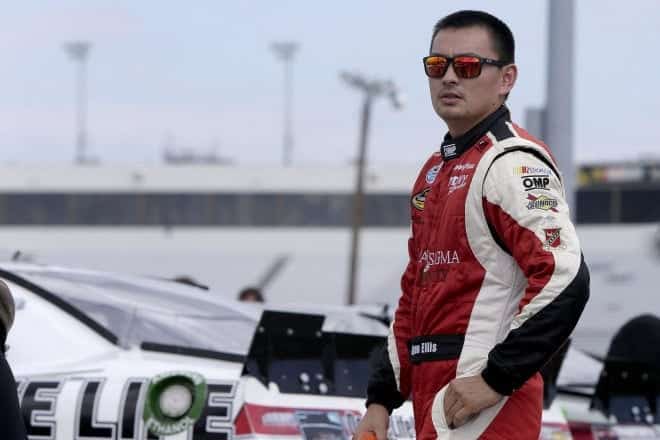 The light at the end of the tunnel is nearing. At least that’s what one 25-year-old racer believes.

Ryan Ellis, who ran 21 races in the XFINITY and Camping World Truck series last year, is set to embark on a new journey in 2015. Racing a combination of the two divisions, the Virgina-native is set to run at least four events for FDNY Racing, owned by Jim Rosenblum, along with the possibility of an extensive schedule in both divisions.

“I have four to six Truck Series races,” Ellis told Frontstretch on Tuesday afternoon. “That’s just with the FDNY team, but there could be a bunch more coming. I haven’t really had too many talks with truck teams as of yet. I’m focusing on XFINITY. I’m hoping to run somewhere between 10 and 15 XFINITY full races. That will come as I figure out my sponsorship because I do have a lot of offers out there. I have a couple of races at Mid-Ohio and Road America that look really promising with a really good team.”

Although Ellis has yet to officially sign with any team besides FDNY Racing, the former sports car racer is going to be in the XFINITY Series for nearly half of the 2015 season. Along with a partial schedule in NASCAR’s second-tier division, he is hoping to run the majority of the Truck Series slate, with a potential  deal in place to put him in a truck in the races he will not be with the No. 28 team. Rosenblum’s FDNY colors will be on the track at the season-opener at Daytona for the NextEra Energy Resources 250, along with the Charlotte race in May, Pocono and Talladega.

In 2014, Ellis driver competed in 12 XFINITY Series events. After a combination of a team shutting down early in the year, deals going sour and a lack of funding, Ellis ran just two full races (Las Vegas and Richmond). Finding a home late in the season, he attempted to make eight of the final nine races with The Motorsports Group. However, with a focus on its NASCAR Sprint Cup Series preparations heading into the 2015 season, he and teammate Matt DiBenedetto were on the border of making races, and Ellis DNQed for four events.

“I’m really fortunate to have the job with The Motorsports Group last year,” Ellis commented on his situation with the No. 46 team last season. “We were a lower budget team, and they were stretching it very thin at the end of the year. You could kind of see that both in the performance of the No. 40 [with Matt DiBenedetto] and with myself. About halfway through the season, their Cup plans started coming together. There were a lot of guys working on that program that were working on the XFINITY program, so the performance started to drop. It was a great experience and I had a steady job, and that’s all that I wanted.”

For the fresh season, Ellis is gathering up information on the approval process to run at least one Sprint Cup Series race. As soon as this week, he will find out if he will be approved to race in NASCAR’s top-tier division. However, the priority remains to find funding for his XFINITY Series ride. With multiple Cup Series offers on the table, he is expecting to attempt to make his Cup Series debut at his hometown track in Richmond.

“I’m hoping to make my [first] Cup Series start this year,” he continued. “I am actually going to be on the phone tomorrow (Wednesday) to find out if that is going to be a real possibility. I have a bunch of Cup offers, but I just need the licensing at this point.”

In 19 career XFINITY Series starts, Ellis has a career-best finish of 24th at Richmond in 2014. On the Truck Series side, he finished 18th in his series debut, and ended up with a 19th-place result at Pocono, which marked the first time FDNY Racing finished on the lead lap multiple times in a season since its debut in 1995.

“Last year taught me that having faith in it and not worrying about things that are not in my control is the best way to do it. I just need to keep working hard, and worrying about it does not help me at all. I need to put myself out there in more different ways than other drivers, and hope that something comes to fruition because that’s what happened last year.”