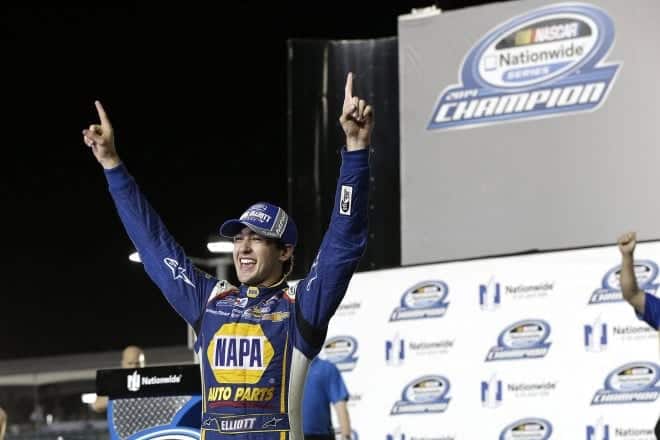 Just one day before his father is inducted into the NASCAR Hall of Fame, Hendrick Motorsports confirmed the speculation that Chase Elliott will run full-time in the Sprint Cup Series in 2016.

The defending XFINITY Series champion will take over the No. 24 Chevrolet after Jeff Gordon completes his final season of full-time competition in NASCAR. Sponsorship for his 2016 rookie campaign will be announced by the organization at a later date.

“Chase brings the kind of intangibles that make him the total package as a driver,” HMS owner Rick Hendrick said. “Not only is he a special talent inside the race car, but there’s a natural combination of competitiveness, work ethic and smarts that you rarely see. Chase’s personality and demeanor make him popular with fans, teammates and sponsors. He’s a great fit for our organization on many levels, and we feel he and Alan will be a successful combination. There’s a lot to be excited about.

Elliott will also make his Cup debut at Martinsville Speedway in March as part of a five race deal with NAPA Auto Parts, piloting the No. 25 Chevrolet. He will also run Richmond in April, Charlotte in May, Indianapolis Motor Speedway in July and Darlington in September with Kenny Francis atop the pit box.

“Chase has been a fantastic ambassador for NAPA,” said Gaylord Spencer, senior vice president of marketing for NAPA AUTO PARTS, primary sponsor of Elliott’s JR Motorsports XFINITY Series ride. “As he embarks on this important next step in his career, we’re proud to support him across both series in 2015 and look forward to an exciting year on and off the track. The NAPA Family is behind Chase 100 percent.”

Last season, Elliott became the youngest NASCAR national series champion, just shy of his 19th birthday. He was also the first driver in the sport’s history to win Rookie of the Year alongside a series championship. During his 2014 XFINITY Series campaign, Elliott scored three wins, 16 top 5s, 26 top 10s and an average finish of eighth in 33 starts.

“So many people have been behind me, and the first thing I want to do is thank them,” Elliott said. “My parents especially have believed in me every step of the way, and I know this wouldn’t be possible without all the sacrifices they’ve made to focus on my racing career. This is such a big week for our family.

“I’m also extremely grateful to Mr. Hendrick and my teammates at both Hendrick Motorsports and JR Motorsports for believing in me. NAPA has been a huge supporter, and I’m honored to represent them on and off the track. Of course the fans have been amazing to me, and I’m so appreciative of that. I know how rare this opportunity is and will work as hard as I can to make everyone proud.”

Talk about the worst kept secret in NASCAR. I wonder what the sponsorship line-up will be for Chase in Cup? Will NAPA follow him full-time? They are known to not like sharing the car with other sponsors. What happens to Axalta and 3M? I’m guessing either one or both could slide over to Jr. to fill his remaining sponsorship holes.

oh well duh, of course he is. And I’m going to nitpick on one of the things I hate most about NASCAR and its insisten on revisionist history. Chase Elliott is a NATIONWIDE champion, not an Xfinity champion. The Xfinity series did not exist when he won last year.

Happy for Chase, I’m sure he’ll do fine, but I’m a Gordon fan and I won’t be switching to the new kid on the block.

With Elliott now the appointed successor, no one will be promoted more throughout this year. Richard Petty himself could return in a one-off and win at California and get second billing to Chase Elliott’s upcoming debut at Martinsville.

Sadly, I don’t know if it’s due to a controlled media feeding by Nascar or just lack of total imagination or laziness in the Nascar broadcasting and print media…I am not a fan already, I got “Chaselash”. He is already deemed the second coming, I fear the narrow scope of reporting at the expense of all others will just be Bill/Chase, Chase/Bill…regardless of whom is leading or crashing or having engine trouble. Bill and his offspring will be the talk of the town. The sad thing with Nascar and maybe sports in general, is just because some are enamored with whomever the flavor is at the moment, doesn’t mean the whole racing community has the same take on the object of their affection or love. I’ll be rooting for the underdogs!

kb, I agree with you. I’m sure Chase Elliott is a fine fellow but he, like the other drivers that NASCAR really wants to sell us, will be promoted endlessly. It is sort of like when they play a song on the radio over and over and over. I may have liked it but by the end, not so much.

I’ve felt the same way about every driver NASCAR & the media have tried shoving down my throat. Just show the racing and I’ll decide who I want to cheer for or against, as the case may be.

Gordon came out in one of the media events and pretty much said he hopes his fanbase will support Chase in 2016. I get it, he’s always been a “company man” sometimes at the expense of what I thought was good for his own career (for instance supporting Johnson no matter how crappy a teammate he was in return), but as far as it goes for me, well, I just don’t feel like doing that. NASCAR as a sport has become a losing proposition as far as the “fun” factor goes and I’m simply not interested in being a diehard fan any longer. Gordon getting out of the 24 car at the end of 2015 means that I no longer will feel compelled to bother.