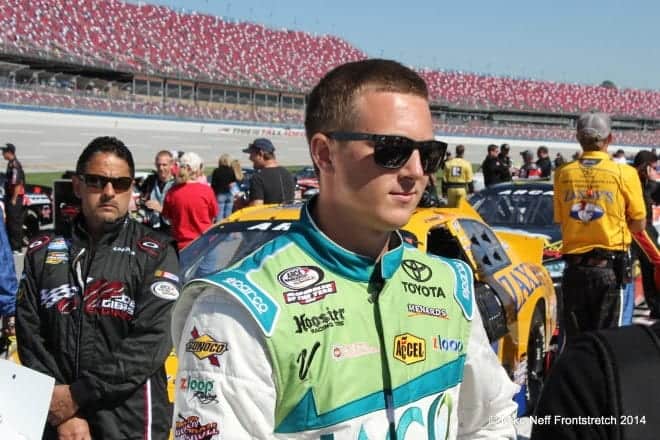 Over the past weekend at Homestead-Miami Speedway, Kyle Busch Motorsports announced the addition of Justin Boston and Matt Tifft to its driver lineup for the NASCAR Camping World Truck Series in 2015.

Boston will run the full schedule in search of winning the Sunoco Rookie of the Year Award after running the full ARCA Racing Series season in 2014, finishing fifth in points with wins at Toledo Speedway and Madison International Speedway. The 25-year-old also made two Nationwide Series stats in 2014, finishing ninth in his debut at Kentucky Speedway.

“Being able to drive full time in the Camping World Truck Series next season is definitely a big step in my career and I can’t thank everyone at KBM enough for this opportunity,” Boston said. “KBM builds really fast Toyota Tundras and I know that I’m going to be in a position to win races next year — as a driver that’s all you can ask for. I was only able to make one Truck Series start this year, — so there are going to be some learning curves — but I’m confident that my experience running full-time in the ARCA Series the last two seasons has helped me prepare for the challenge.”

“The opportunity to drive Toyota Tundras for Kyle Busch Motorsports in six Camping World Truck Series races next season is one that I’m extremely proud of being provided with,” the 18-year-old said. “KBM is such a well-respected team in the Truck Series and I’m excited to be able to go out next year and prove what I can do behind the wheel of top-notch equipment. I’m confident that this part-time schedule will allow me to showcase my abilities as I work towards securing a full-time opportunity for 2016.”

Kyle Busch Motorsports is coming off a banner year that saw Darrell Wallace, Jr. finish third in points after a couple tricks to Victory Lane, while Erik Jones and Kyle Busch split time in the No. 51 Toyota Tundra en route to scoring the owner’s championship.

KBM announced earlier this year that Jones will run the full truck schedule in 2015.

“Adding these two talented young drivers to the driver lineup at KBM next season gives us the opportunity to compete for the Rookie of the Year honors with Justin, a driver’s championship with Erik (Jones) and the owner’s championship sharing a truck between Matt, myself and Daniel,” Busch said. “Justin was able to pick up a couple ARCA wins this season and had solid runs in his starts for JGR in the Nationwide Series. Matt knocked on the door of victory a couple times in the ARCA Series while running a part-time schedule and had a nice run in his Truck Series debut at Martinsville last month. We’re looking forward to seeing both of them behind the wheel of our Tundras next year.”

KBM said that information with regards to truck numbers, sponsors and crew chiefs for both drivers are forthcoming.

Residing in Canada, she freelances for a number of racing publications, from SpeedwayMedia.com to On Pit Road while covering local short tracks up in Ontario.

KBM is doing a great job of giving young drivers a chance to show their stuff. Funny for a guy that can be so polarizing, Kyle really is making a large contribution to the future of NASCAR promoting drivers who don’t bring big money to the table. Very nice to see.