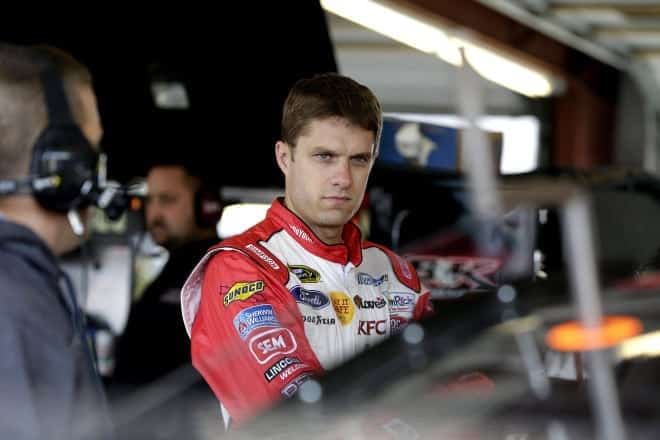 The Eliminator Round is underway and already multiple drivers are in trouble.

The tight confines of Martinsville Speedway proved challenging for some as new rivalries were ignited and older ones brought back to life. Yet, some championship hopefuls escaped with little more than a scratch and one driver – unfulfilled by last week’s restrictor plate race at Talladega Superspeedway – left with a grandfather clock.

This edition of Who’s Hot and Who’s Not sets the stage for the 34th event of the Sprint Cup Series season: a return trip to the Lone Star State, where one of the eight remaining Chasers triumphed in April’s Duck Commander 500. Here’s where some drivers stand as the 2014 campaign moves into its final month.

Jeff Gordon might not have gotten exactly what he wanted at Martinsville (an active record ninth Ridgeway), but he did get what he needed. In finishing runner-up, Gordon beat out every other Chaser, and he collected two bonus points. The result: Gordon owns a slim three-point margin atop the standings.

Although Gordon’s recent Fort Worth results are suspect, there is hope. After back-to-back 38th-place finishes there in 2013, Gordon piloted a specially sponsored Texas A&M School of Engineering No. 24 Chevrolet to second behind eventual winner Joey Logano earlier this season.

Logano is off to a promising start for the third consecutive playoff round. After leading 60 laps (a new career high at the Paperclip), a fifth puts him only four points behind Gordon. Logano’s Hot or Not inclusion comes in part because of his Chase-time ways, but he deserves credit for keeping it smooth despite pressure from Denny Hamlin.

Watching Hamlin use aggressive measures in pursuit of Logano struck memories of their 2013 rivalry that included similar-looking contact and an eventual bump-and-run maneuver at Bristol Motor Speedway that spun the No. 22 Team Penske Ford and later ignited a post-race argument. Neither driver lost control this time despite prolonged close quarters action as Hamlin went on to record an eighth that keeps him in contention.

Ryan Newman is also in the mix after finishing third. Newman looks to build on a run of five progressively improving finishes upon arrival in Texas, where he has top 10s in two of the last three events.

Dale Earnhardt, Jr. might not lift the Sprint Cup trophy in South Florida but that won’t keep him from following a pursuit for other post-race prizes. Earnhardt earned his first prized grandfather clock Sunday, becoming the first non-Chaser to win a race during this season’s playoffs.

Next, Earnhardt will go after his second pair of boots – hand-carved cowboy boots. The winner of every TMS race receives the boot trophy, complete with spurs. Earnhardt has shown recent flashes of what it will take to get back into Victory Lane there, including a runner-up finish in last fall’s AAA 500 and top 10s in six of nine races since the beginning of 2010.

Tony Stewart came closer to celebrating a win than he’s been at any point this season in Martinsville. Stewart inherited the lead after other drivers ahead of him pitted following a red flag with 10 laps remaining. Stewart led until Earnhardt worked past the No. 14 Chevrolet with four laps remaining and settled in fourth. Stewart didn’t make things easy for Earnhardt or eventual runner-up Gordon, rubbing against their Hendrick Motorsports machines as they surpassed him. Stewart’s reinforcement of his intimidating on-track persona helps to secure a Hot or Not spot.

David Ragan posted his first top 10 of the season and fifth in three years at Martinsville. It is also his best Martinsville finish since an eighth in 2011.

Just a week after salvaging his season and aspirations for a second NSCS championship at Talladega, Brad Keselowski will be forced to do it again following a 32nd in his Eliminator Round debut. The No. 2 Alliance Truck Parts Ford Fusion suffered a broken transmission that sidelined Keselowski in the early portion of the race and then he was involved in two wrecks after returning.

It’s far from an ideal situation for Keselowski, who is already 26 points behind the Chase cutoff. Another discouraging fact: Kevin Harvick also needs a win to advance. Harvick and Keselowski have combined for nine victories this season, and have been two of the most explosive drivers this season from a production standpoint. With only two races left before Homestead-Miami Speedway, chances are that at least one of them will be disappointed.

Worse, Harvick would appear to be more likely to get that breakthrough result this week. His three top 5s and 11 top 10s in 23 starts trumps Keselowski’s single top 5 and three top 10s in 12 starts – and neither driver has won. Harvick has the clear edge when his 13.6 average finish is brought into play, because Keselowski owns an unimpressive 19.5 mark.

Carl Edwards has relied on decent finishes and a lack of big-time mistakes to transition into the semifinals, but he’ll have to do better than his 20th at Martinsville to qualify for the championship round. Unfortunately, Edwards hasn’t shown the explosiveness of drivers like Harvick or Keselowski and hasn’t won at TMS since 2008.

Martinsville is synonymous with creating and fueling rivalries; the Hamlin–Logano feud was one wrong move from being fully reignited. The smallest NSCS track also has a reputation for carnage. There were 15 cautions in Sunday’s race, two red flags, and 21 percent of its 500 laps were run under the yellow flag. Kasey Kahne‘s and Brian Vickers‘ actions are major reason’s why venue has its rough-and-tumble history. Kahne and Vickers couldn’t get away from each other, combining for four of those cautions.

The drivers were first involved in a lap 161 accident that left the No. 55 Michael Waltrip Racing Toyota without a hood. It didn’t take long for Vickers to get payback. Just 61 laps later, he plowed into Kahne’s No. 5 Chevrolet, sending Kahne into the outside wall and to the garage. Upon returning, Kahne again wrecked Vickers, leaving the drivers at odds after the race. Vickers somehow salvaged a 27th-place finish, while Kahne was relegated to a 40th.

I just want to tell you that I’m very new to blogging and site-building and honestly liked this web-site. Likely I’m going to bookmark your blog . You definitely come with amazing well written articles. Appreciate it for sharing your web-site.

It truly is practically unattainable to see well-qualified americans on this subject, however, you seem like you understand exactly what you’re raving about! Thanks A Lot