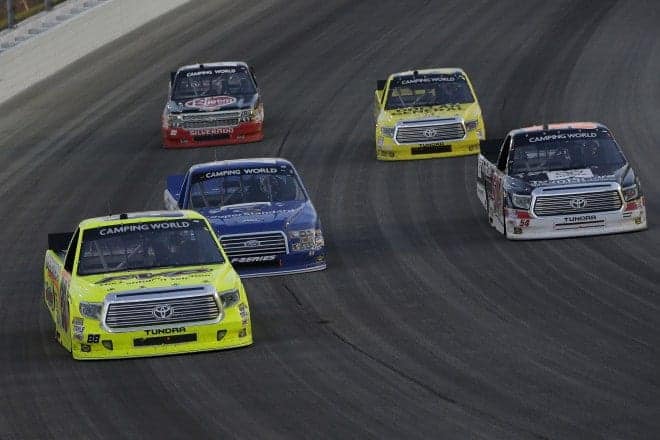 In a Nutshell: Kyle Busch took the checkered flag 1.129 seconds ahead of Matt Crafton to grab his fifth victory this season in the rain delayed Lucas Oil 225 at Chicagoland Speedway Saturday evening. Busch used a lapped truck to assist in his pass of Austin Dillon to take the lead for the final time on lap 134. Dillon, Tyler Reddick and Jeb Burton rounded out the top 5.

Who Should Have Won: Kyle Busch. Erik Jones practiced the No. 51 Toyota while Busch fulfilled his Chase for the Sprint Cup media obligations, and when qualifying was cancelled by rain, the field was set by those practice speeds. Because of the driver change, Busch was forced to drop the back on the initial start but made quick work of the field and found himself inside the top 5 when the competition caution flew. Following that pit stop, the driver of the No. 51 had to once again drop to the back of the pack following a pit road speeding violation. He also got caught one lap down when the caution flew during a late round of green flag pit stops. Busch took the wave around and wasted little time making his way to the front once again. It’s hard to argue that any other driver should have won when the one that actually ended up in victory lane drove from the back not once, but twice.

Johnny Sauter started on the pole Saturday evening and led early, pulling out to a more than two-second lead in the opening laps of the Lucas Oil 225. It looked like the driver of the No. 98 Toyota might be the next to head to victory lane, however pit road proved costly throughout the night.

Under the first caution, Sauter lost three positions and was left to try to work his way through the field, something that was made difficult by the changing track conditions. Sauter faced a similar problem under the second caution when he lost another position.

But that’s not where it ended for the driver of the No. 98 Toyota. In the late stages of the race, the green flag run was long enough that teams began a round of green flag pit stops. Inside 50 laps to go, Sauter was busted for speeding on his green flag stop and was put two laps down. He took the wave-around under the final caution but still only managed to finish 14th, one lap down.

“That first run we started out tight on exit and then swung to the free side, We made some adjustments on that first stop to give us some security and then I was just free everywhere, especially through the center,” Sauter said. “All-in-all it was a decent night until we got caught a lap down due to pit strategy and then the pit road penalty. After it was all said and done we were two laps down. We took the wave around on that last caution and got one of our laps back but never could get another caution to get back on the lead lap.”

If you were to look at Darrell Wallace, Jr.‘s race on paper, it would seen rather uneventful as he finished where he started in sixth. But that hardly tells the whole story. After getting bunched up on the initial start by Brennan Newberry, who spun his tires, Wallace maintained his spot inside the top 10 for quite some time before making a fuel only stop that put him out in front of the field for nine circuits before his boss overtook the top spot.

After being out on his old tires for quite some time, the sophomore driver radioed to his crew that he had a right front tire going down. The driver of the No. 54 Toyota drove down pit road on an unscheduled pit stop as his tire shredded before popping when he tried to stop in the pit box. After sliding through the box a little and backing up, the crew bolted on four fresh Goodyears and sent him back out on track one lap down.

A late race caution allowed Wallace to take the wave-around and rejoin the lead lap in 12th position. Once the green flag flew for the final restart, Wallace drove through the field to sixth, right where he had started.

Though on paper the night looks pretty average, it was far from that for Wallace, but one thing that is certain is that the entire No. 54 team showed exactly why Kyle Busch Motorsports has been so unstoppable this season. And that kind of ability to work through adversity to a solid finish is the kind of thing that champions are made of.

* Austin Dillon’s No. 20 NTS Motorsports Chevrolet failed post-race inspection on Saturday evening when the front end was found too low. NASCAR will evaluate their findings and penalties will likely be announced on Tuesday.

* Rookie Tyler Young scored his career-best finish of 11th Saturday night at Chicagoland Speedway. Piloting the No. 02 Chevrolet, the Midland, Tx. native bested his previous high finish of 14th at Michigan a few races ago.

* The Lucas Oil 225 marked yet another short field for the Truck Series this season with only 32 drivers starting the race. Additionally, five of those trucks were start-and-park operations that all completed less than five laps before calling it quits. Mike Harmon and Ted Minor both failed to run a single circuit, while Scott Stenzel and Adam Edwards ran three laps apiece. Caleb Roark retired after just four laps.

* Kyle Busch will give up the No. 51 Toyota to young standout Erik Jones for the next five races. The team owner will return to the track for Texas Motor Speedway and Homestead-Miami Speedway in November to close out the year.

“We had a great Harper / ACE Hardware Ford F-150, and we were able to bring home my first top-5 finish and another top 5 for the No. 19 team. I can’t thank BKR enough. Everybody with the organization works hard to give us great trucks week in and week out. I’d say the biggest swing took place right as the sun went down. I went from being pretty loose to pretty tight in a matter of five laps and that was eye opening. We had a pretty good truck because we were neutral and were able to stay right where we needed to be balance wise.” Tyler Reddick, finished a career-best fourth

“This was a really great run for our Heater.com team; I’ll take a top 10 for sure. I really would have liked another caution at the end to get one more chance to run up to the front, but this finish is exactly what this team needed. Our truck was really fast, especially there at the end. I’m really pumped about the potential we have in these final seven races. I really have to thank my team owner Harry Scott for his dedication to this team’s success and everything he’s done for our organization.” Ben Kennedy

Points Update: Matt Crafton’s runner-up finish, combined with his teammate Johnny Sauter’s troubles, allowed the defending champion to retake the top spot in the standings. Crafton now leads Sauter by five points. Ryan Blaney remains third, 16 markers behind Crafton. Darrell Wallace, Jr. and German Quiroga round out the top 5. Joey Coulter moved up one position to sixth on the strength of his fourth top-10 finish in the last five races. Ben Kennedy jumped to seventh, up two spots from the last race, and Timothy Peters remains in eighth. Ron Hornaday, Jr. has dropped another three spots to ninth, while Jeb Burton rounds out the top 10.

“I knew we were going to have a fast Tundra tonight, the guys have done a really nice job this year. This was a true testament of what this team is all about, where we’ve come and what we’re all about this year with the support that we’ve got and everybody that works so hard at TRD (Toyota Racing Development). It’s a good one for us to be in, but it’s going to be Erik Jones’ chance here the next few races and I’ll get back at the end and see if we can’t win an owner’s championship.” Kyle Busch

“The Menards Toyota Tundra was pretty darn good tonight; we just needed a little bit more there at the end. We were really good at the start of a run and then I would get free. We just kept tightening it up, and we may have gone a little too far. Then we were a little bit too snug on that last run. I don’t know if it was on the splitter or what, but not a bad day for this Menards Toyota team. I’m not worried about the points – we have a long way to go with that. I’m just tired of finishing second to Kyle (Busch).” Matt Crafton

“The window came loose and we were pretty free. I don’t know if that is all of it, but these guys never gave up. All the way to the rear and came all the way back. It was a good effort and hopefully this is some momentum to end out the year right. I think the last four or five races we’ve ran a lot better. Our finishes haven’t showed up. Tonight it feels good to finally have some breaks and things go our way and get that first top 5 (of the season). Hopefully, there’s seven races left — we’re going to get a win before it’s over with.” Jeb Burton, finished fifth

Up Next: The Camping World Truck Series returns to New Hampshire Motor Speedway next Saturday after a two-year hiatus. The last time the series visited the track in 2011, Kyle Busch dominated, leading 165 of 175 laps en route to Victory Lane. Coverage for the UNOH 175 begins at 12:30 p.m. ET on Fox Sports 1; the race can also be heard on your local MRN affiliate or SiriusXM NASCAR channel 90.

Give it up. Go home. The truck party is over

they had a truck race this weekend? no one could watch it so why did they bother?