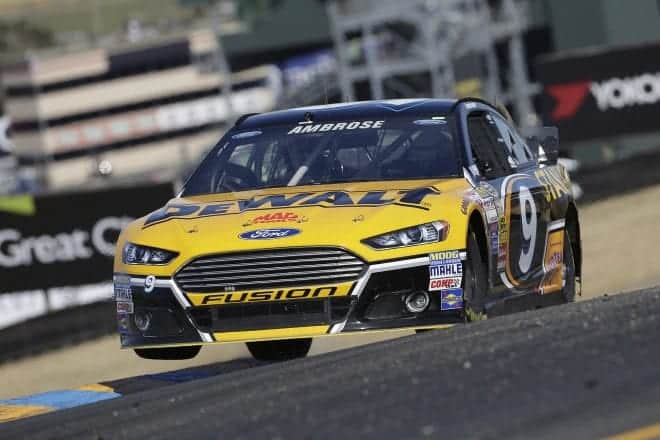 When it came to making fantasy auto racing picks for road courses, for years it seemed like a safe bet to look at the so-called road ringers and try to pick up a top 10 finish with a cheap or rarely used driver. But taking a look back at the last three road course races, the numbers are starting tell us a couple of things. First, the regulars on the Sprint Cup circuit have improved quite a bit at making the left AND right turns. Second, while the so-called road course specialists may be quite adept at maneuvering the left and right turns in other forms of racing, the heavier and wider Sprint Cup cars must by quite a different type of thing for them.

That’s because the best finish of any so-called road course racer in the past three races (two at Sonoma and one at Watkins Glen) was an 18th by Boris Said at Sonoma last year. That doesn’t include a fifth place by Juan Pablo Montoya, who is no longer a Sprint Cup regular and who is not entered in Sunday afternoon’s Sprint Cup race at Watkins Glen.

So, if you think you are making that special kind of selection that will get you a win or even a top 10 finish from picking one of the road course ringers think again.

And here’s one more tidbit that should cause you to pick with caution for this week’s race. Of the 14 road-ringer entries in the last three Sprint Cup road course races, their average finish has been 32.2. And we all know, that kind of finish is not going to help you move up in your fantasy standings.

The driver with the most pressure on him heading into this weekend is without question Marcos Ambrose. He and everyone else knows that this is his best chance to win in NASCAR’s regular season, and therefore his best chance to make the Chase for the Championship. So, true, while there will be pressure, Ambrose also has reason to feel confident. He has won one of the last two races at The Glen and has led 59 laps in those two races. For his career at Watkins Glen, he has five top five finishes among the six races, and he is racing under the specter of returning to Australia in 2015 to run the V8 Supercar Series he once dominated. So, for a host of reasons, expect Ambrose to be at or near the front Sunday.

Another driver looking for his first win and also pretty and much needing a win to make the Chase this year, is three-time champion Tony Stewart. Like Gordon, he hasn’t been great at Watkins Glen lately, finishing 19th two years ago and then missing last year’s race due to his leg injury from a sprint car accident. But with Stewart recently climbing back into the sprint car and winning races with the sort of regularity that saw him soil his seat in 2004, he may well be ready to experience that feeling again –but in a good way. For his career, Stewart has five wins in 14 career races at The Glen and has finished in the top 10 on 10 occasions, including one of the most ridiculous road course stats of all: from 2002-2009, Stewart won or finished second in every race — save for the 2003 event when he shamefully sauntered home in 11th. Stewart sits second only behind Jeff Gordon among active drivers with 225 laps led at The Glen.

A driver who has been knocking on the door for victory at Watkins Glen, but hasn’t knocked it down yet, is Brad Keselowski who has finished second in each of his last two trips to the 2.45-mile, 11-turn road course, including one of the greatest finishes in the history of NASCAR, the 2012 skirmish between he, Kyle Busch and Marcos Ambrose:

In all, Keselowski has had four Sprint Cup races at Watkins Glen, where he has three top-five finishes and has led 37 laps. And even though it’s just four races, Keselowski has the best average finish among active drivers at 6.5. Also, don’t forget, in this kind of race it’s pretty much understood that if you are faster than the guy ahead of you, you either need to let him by or be ready to be bumped out of the way, something that Keselowski is not afraid to do so. Given how fast the Penske Fords have been at nearly every race so far this season, that may not even be necessary.

A driver who has proven he knows how to race on the road courses in the IndyCar series and the Nationwide Series is A.J. Allmendinger. And he also shown he can handle the Sprint Cup car pretty well on those type of tracks, too. Allmendinger finished 10th at The Glen last year and has three career top 10 finishes in five career races there. He was in contention for the win earlier this season as Sonoma, until contact with Dale Earnhardt, Jr. sent him into the frontstretch wall. This is one of the races the JTG Daugherty team has circled as their chance to win and get into The Chase — and they have an impending sponsorship announcement coming to boot.

One of the keys to winning at Watkins Glen is not being afraid to use your bumper if you are definitely faster than the guy ahead of you. One driver who is certainly not afraid to enact that tactic is Kyle Busch. He has one win in his last two trips to the Glen and has two career victories there. In his nine career races at Watkins Glen, Busch has finished in the top 10 eight times. He has a career average finish of 8.11 in those races, good for fourth-best among active drivers, having led 188 laps.

And when it comes to using bumpers when necessary, you can’t forget about Kurt Busch here either. While he has yet to win there, he has led 62 laps there in his career with five top 10 finishes in 13 career races, and won a Nationwide race here from the pole in 2006, in a most-memorable frantic last lap battle with Robby Gordon.

Jeff Gordon certainly hasn’t been stellar in recent races at Watkins Glen, finishing 21st and 36th in the last two trips there. But Gordon has seemed a bit re-energized this season, partly because he knows he can win races again. And given he’s driving more now like he did in some of his younger days, expect Gordon to be a contender this weekend. For his career at Watkins Glen, he has four wins among his nine top 10 finishes in 21 races there. He has also led 233 laps there, most among active drivers. Gordon’s most memorable Glen moment might just be this horrific incident with Sam Hornish, Jr. back in 2009:

A driver who is searching for his first win for a guaranteed spot in the Chase is Clint Bowyer. He just might have a shot at it this weekend as he has been fourth and sixth in the last two trips to The Glen. Bowyer has also been adept at saving fuel in these races, something which very well could come into play this weekend. The one bit of a red flag here is that Bowyer has led just one lap in his eight career races at Watkins Glen, and he really doesn’t need to win — he really needs to just avoid getting wrecked or running out of gas and plummeting in the points.
DARK HORSES
This week there are some different choices to make rather than having to use up either Kyle Larson or Austin Dillon if you are on pick limits. But as warned before this, when it comes to road course ringers, pick at your own risk.

The most intriguing name on this week’s list is Nelson Piquet, Jr., who will be paired with his former Truck Series and Nationwide spotter Mike Calinoff. Sure, we all know how good his father was in Formula One, so maybe some of those road course genes have rubbed off. He has won in the Nationwide Series and the Camping World Trucks Series on the road courses, so there is some hope there for a decent finish. Also, Piquet, Jr. did finish seventh at Watkins Glen last year in the Nationwide Series so any past success wasn’t a decade ago and completely irrelevant. So, while there is certainly plenty of risk involved in picking this ringer, he looks to be among the best choice of the bunch.

Also this week, the Said Heads can come out in full force to pull for Boris Said. He does have experience on his side with 13 career races at The Glen with two top 10 finishes, including a third. The jury is still out however if he will attempt another video game dive bomb move into Turn One like he did in 2005, or attempt to beat up Greg Biffle again after the race as in 2010.

The other road ringer entry this week is Alex Kennedy, who will be driving the No. 33 car. He did finish 29th in this race last year and has finished as high as 16th in the Nationwide Series at the Glen. So, there’s that.
With 15 races left in the season, if you’ve still got plenty of picks left for Larson and Dillon, Larson certainly seems like the kind of driver who could excel on a road course, but that wasn’t the case at Sonoma earlier this year when he finished 28th.

Danica Patrick is also worthy of a mention here as well. Yeah she had the lap of her life going last week passing Brad Keselowski and Dale Jr. in the same circuit….and then promptly stuck it into the wall the following corner. In her rookie season last year she started 35 and finished 20th. The cars have been markedly faster this year, and she is comfortable on a road course. If she can keep the tires on it – and wall out of it – she should be a solid option this week as well.

The leader in the Frontstretch Fantasy League on Yahoo! remains LeftTurnsOnly with 5,781 points followed by NoBarNASCAR with 5,719, Mojothemonkey with 5,619, Big Monkey Racing with 5,473 and Shadows PT at 5,440. The biggest mover of the week was Yellow Stripe moving up eight spots into 13th overall.
The top performance for the second time in three weeks came from Checkers or Wreckers with 358 points. It had the winning combination of race winner Dale Earnhardt Jr., with Joey Logano in third, Denny Hamlin in ninth and Kyle Larson in 11th.

Would someone please explain all the AJ Almendinger hype to me. At the Cup level he has thus far been just another mid packer. He seems unable to acknowledge, let alone learn from his mistakes. Listen to his radio chatter. He pushes too hard, wrecks, and then blames everyone but himself. Aside from substance abuse and the over application of hair products I just don’t see where he is exceptional compared to those around him.