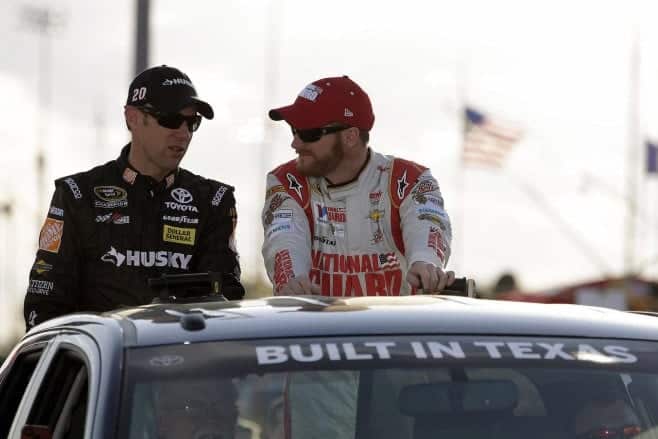 Dale Earnhardt, Jr.’s win at Pocono Raceway was his third race win of 2014, which ties his win total over the past eight seasons combined. Earnhardt, who turns 40 this year, was long thought well past his prime, yet he’s currently enjoying his most successful season since 2004 where he won a total of six races.

Though there is still so much racing left, there are already whisperings and discussions surrounding the potential for Earnhardt to win his first Sprint Cup Series championship this season. As of now, Earnhardt is second in points, 17 markers behind leader Jeff Gordon. If we were under the old system (and, yes, I know I’m breaking my own rule by saying that), then perhaps I could go along with the discussion surrounding Earnhardt’s championship potential. But with this new Chase system, where the points will be reset no less than three times before the season is over, who knows whether or not Earnhardt can hang on that long?

For the sake of discussion, though, let’s hypothetically say that Earnhardt makes it through the first three rounds in the Chase, winds up among the final four at Homestead, and somehow pulls through to win the championship. Earnhardt would be the first driver since 1999 to win his first Sprint Cup Series championship in his 40s and third in NASCAR’s modern era. Bobby Allison won at age 46 in 1983, while Dale Jarrett earned his first championship at 43 years of age in 1999.

While that would be an impressive accomplishment, I’m not so sure I’m sold on Earnhardt winning the championship this year. Whoever wins the cup is going to have to put together a near perfect Chase and, while I think the No. 88 is capable, the only team we’ve seen consistently be able to do such a thing is the No. 48 team. While Earnhardt and his race team are certainly championship material, the whole thing feels so impossible that I’m having a hard time imagining anyone in that scenario, let alone a person who hasn’t had a good season in a decade’s time.

Then again, this system emphasizes wins so heavily that Earnhardt might just have a shot. Only two other drivers have as many wins as the No. 88 team this year (Brad Keselowski and Jimmie Johnson have won three times), so they certainly have that part of it down.

Still, I can’t quite wrap my head around a dominant driver at this point in the season winning the championship at Homestead. So much is going to change before then that it’s difficult to imagine all the same players still in the running once we reach that point. It’s not that Earnhardt’s team isn’t championship caliber. It’s just that there will be so many more twists and turns before we will even know for sure who the championship contenders are, it’s almost ridiculous to think this point in the season will have any standing on what happens almost three months from now.

Ugh…. too many numbers. The No. 88 team should be proud of their season, but I don’t think we should be jumping to conclusions about their championship hopes just yet. There is still way too much that we don’t know.

“Summer, I’m a longtime Mark Martin fan. Have been from the very beginning and haven’t been able to find a driver to replace him. So I was really excited to see that he’ll be back at Roush again.

Mark drove for a bunch of different teams after he left Roush. I was wondering if the information he learned there would benefit Roush any and, also, is there a chance he’ll be behind the wheel at some point in the future? Maybe even just at tire tests and whatnot? I still watch the races but have slowly been losing the same passion for it since Mark quit racing. Just haven’t been able to find a driver to replace him in my heart, I guess. It might help me regain my interest to see him behind the wheel again.

Mark Martin’s experience at other race teams will be negligible at best in terms of information-sharing at Roush Fenway Racing because so much has changed in a short amount of time. Martin’s last full season was in 2011 and he hasn’t been at RFR since 2006. So much has changed in that amount of time that any knowledge Martin would bring to the table in terms of equipment and performance would be out of date. With the constant changes the car has gone through from the Gen-6 car to rules changes, barely any of the equipment that teams used when Martin was competing is still being used today. Basically, it’s all different.

As far as Martin returning to the racecar, he said in an interview with Sporting News that he has no interest in returning to the car in any capacity whatsoever. That’s testing, competing, practicing, anything. I hate that this one driver is the reason you’re having trouble maintaining interest, but I know how passionate fans are about their drivers. It’s their main motivation for tuning in, in many cases.

Hopefully knowing that Martin is behind some of the younger drivers at RFR will help you regain some interest. But I wouldn’t hold your breath on expecting to see Martin in a car simply because he has a role at RFR now. If Martin has his way, he’ll probably never race again.

“Why doesn’t NASCAR take wins away from teams that fail post-race inspection? At local short tracks, if you fail post-race inspection after winning, guess what, second place gets the victory! In fact, at my track (is it like this everywhere?), if anyone fails tech, they lose their position and get credited with last place. NASCAR is the head honcho, the big kahuna. Shouldn’t they set the example and do the same thing?

I can’t remember the last time this happened, but I know winners have failed post-race inspection and didn’t have the win taken away. Even though Hamlin didn’t win the race, it made me think of that.” Alexa

No, Hamlin didn’t win the race, but I think you’re asking if Hamlin had won the race, would he have still been credited with the win.

I would be willing to confidently say yes, and here’s why. When pressed on that issue in the past, NASCAR officials have answered that they believe the fans who leave the racetracks should know who wins. That means that NASCAR doesn’t want its fans to leave the track thinking Driver A won the race only to find out one or two days later that Driver B was actually credited with the win. NASCAR has routinely taken the benefits of the win away (points, money, Chase bonuses, etc.) after a winner failed post-race inspection, but they leave the actual win in the record books alone for the fans who attended the race.

Personally, I don’t have a problem with that. I don’t care if a driver is still credited with the win after failing post-race inspection, as long as the benefits of winning are taken away. I don’t necessarily disagree with their reason and I think it’s understandable. I think allowing the win to stand and just taking away the benefits of winning are a good middle ground.

“Ok I need help…. I’m lost. Who’s in, who’s out of the Chase? I’ve tried figuring it out and I’m struggling to understand. It was much easier to understand who was locked in on points rather than all of this other stuff.” Wilfredo

So the new Chase was supposed to simplify things, but I have to agree with you there. The clinching scenarios are really throwing me off.

Denny Hamlin, Aric Almirola, and Kyle Busch could all potentially clinch this weekend in Watkins Glen. Everyone else has yet to win a race (Matt Kenseth, Greg Biffle, and Clint Bowyer the notables among the winless).

It’s … confusing and requires a lot of numbers, but then again so did the old system. I say just we should just let NASCAR’s statisticians deal with it and then tell the rest of us who are bad at math what’s what. Hey, I’m a writer, not a mathematician!

“Still, I can’t quite wrap my head around a dominant driver at this point in the season”

That’s because the whole chase format is an even bigger crapshoot than it was before.

By the way, exactly what is the email address to submit questions to this mailbox? I’ve looked around the website but can not find it and I can’t recall seeing it mentioned it past Mailbox articles.

I agree that it really doesn’t matter if a driver is credited with a win after failing post-race inspection, as long as the benefits of winning are taken away. I probably don’t understanmd the rules well enough since I don’t have a PhD and my IQ isn’t in the genius level, but if a driver does win a race and fails post-race inspection, is he still credited with the win as far as making the chase is concerned?

From what I have heard, NASCAR will take away the benefit of a win counting towards Chase eligibility if the car fails tech and the violation is serious enough.

Remember back to Las Vegas a few years ago when Carl Edwards won but the oil tank cover fell off inside the car? He kept the win, but the win didnt count towards his bonus points to start the Chase that year.

I’m sorry Wilfredo, but it doesnt take much paying attention to find the Chase stats right now. Its posted almost every day in Frontstretch’s newsletter, and you can find it at nascar.com or almost any other sports page that covers NASCAR.