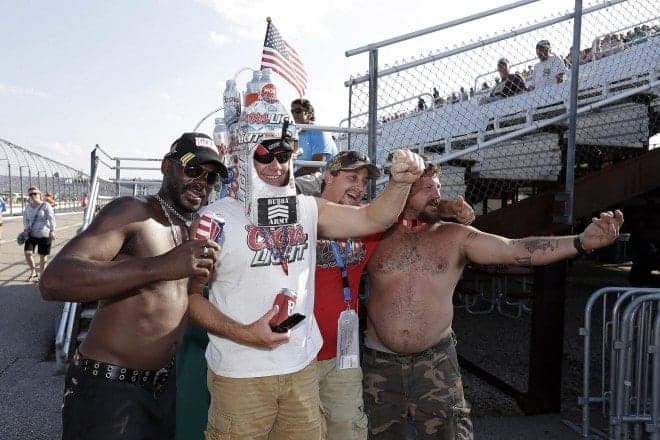 We are all familiar with Jeff Foxworthy’s trademark redneck jokes. In fact, you probably are one if you are reading this now.

Now I not about to assert that I, even though we share the same first name, am anywhere close to Foxworthy’s status, but like him, I too have made a few observations over the years that I have been a fan of NASCAR. Some are more obvious than others; however, even when I’m nowhere near a race track, it is still pretty easy to spot even the casual fan.

Without further adieu, I say, “You may be a NASCAR fan if…”

-If you get pulled over and could tell the officer exactly how fast you were going, even if you speedometer doesn’t work but your tach does.

-If you met your significant other at the track or some other racing-related event.

-If you have to go to a formal event and realize that all your clothes have a ‘number’ on them somewhere.

-If you go to a restaurant, and really, really like entrée No. 18, but order something different because you don’t like Kyle Busch.

-If you gain weight or lose weight just to keep you waist size the same as a certain car number (wish my guy was No. 34 instead of No. 99!).

-If your kids or other family members are always giving you gifts related to racing, and you display them all (the gifts) even though they don’t relate to your favorite driver

-If you butt in to a stranger’s conversation to correct them as to the next race on the schedule, without even consulting the little schedule in your wallet

-Obviously, if your significant other is a fan too, that is swell, however, many times that is not the case. If your spouse still loves you, even though you run off with your buddies for a week in an RV loaded with beer, you may be a very lucky NASCAR fan. If your spouse continually refers to “those damn cars turning left,” but you still love him/her, if you buy your non-fan spouse expensive gifts the week before you run off with your buddies for a week or if you’ve ever threatened one of your buddies that “those pictures better NEVER get out!” you might be a NASCAR fan.

-In the bedroom, if you know your spouse’s mood by the color of flag displayed on his/her nightstand; or like the classic commercial suggested, if you have a set of flags outside the bathroom; or if you think of racing instead of bug killer when someone mentions “black flag”; or if you know what either a black flag with a white x in it or a blue flag with an orange diagonal stripe means; or if you see a white flag and instead of thinking you are surrendering, you are about to win, you may be a NASCAR fan.

Let’s face it, for most of us, the closest we get to being on the track is our daily commute. When you are out there everyday, consider the following.

-If you refer to the person in the passenger seat as your spotter and expect them to perform as such; or if that person is your spouse, and you actually TRUST their judgment; or if you draft instead of tailgate; or if you don’t mind someone else drafting you; or if you actually drive farther ahead of your car than the front of the hood; or if you or your spotter refer to stuff in the road as debris; or if, when you can, you use both lanes going through a curve on a two-lane highway, you may be a NASCAR fan.

Obviously I could go on and on like some races do nowadays but I won’t. What I want is for you, the loyal Frontstretch reader, to add a few of your own below. However, before you do, I leave you with one more, if you endeavor to:

Stay off the wall (but if you still have the urge to put others into it, even though you resist, you may be a NASCAR fan!)

if you believe the most famous words in motorsports is…….show us your ti…….. you may be a nascar fan! :)

Thanks, what a refreshing change of pace. Just to feed into NASCAR White Trash stereotypes I bought the Kenseth Shirt with the Crown Royal crown sitting on a pillow above the car picture. I cut the sleeves off to complete the image.

If you play “Rack-O” and refer to the numbers by their driver names, you may be a NASCAR fan.

You refuse to shop at Lowe’s.