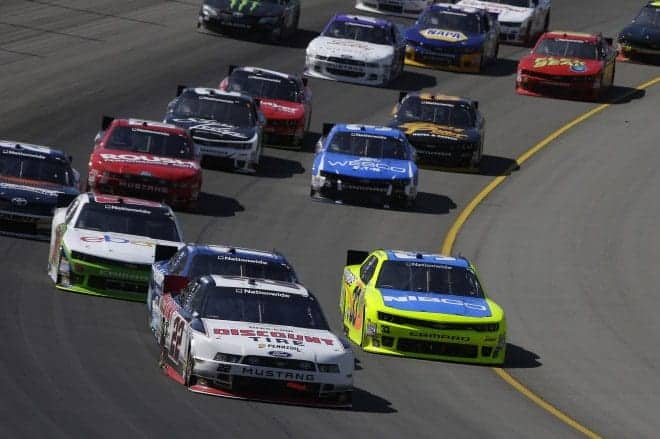 As first reported by Tripp Mickle of the Sports Business Journal, NASCAR is in “advanced talks” with Comcast Xfinity for title sponsorship of what currently is the NASCAR Nationwide Series. The Nationwide Insurance title sponsorship ends after this season, as the brand has chosen to sponsor Dale Earnhardt, Jr.’s No. 88 Sprint Cup car instead, as well as become an associate-level backer of the sport.

According to the SBJ article, discussions between the sanctioning body and Comcast have been developing for several months. Although the two parties have not yet reached any sort of agreement, sources claim they’ve claimed “frontrunner” status, in particular due to the ties the company has with the sport’s new broadcast partner, NBC. NBC takes over coverage of NASCAR’s second half in 2015 and any fees paid by Comcast Xfinity could be worked into their yearly marketing deal with the sport.

NASCAR wants $12-15 million per year for the title sponsorship of the sport’s top developmental national touring series. Other than Comcast, NASCAR has reportedly spoken with automotive retail stores, Advanced Auto Parts and AutoZone about the opportunity. A deal for the series title sponsorship is expected to be completed and announced by the fall of this year.

I’ll admit, I am stunned. I can’t figure why Comcast would want to send truckloads of money at a series no one is watching. Sure glad I don’t own stock.

You should be a part of a contest for one of the most useful sites on the
internet. I most certainly will highly recommend this web site!