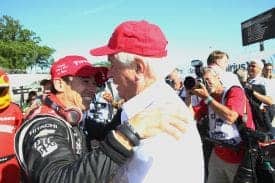 Helio Castroneves’ hot start to 2014 could continue this weekend; he’s the defending winner at Texas.

The easiest way to explain what the Verizon IndyCar Series is looking at this weekend is that it’s their version of the Talladega debate.

The race at Texas Motor Speedway has simultaneously been looked at as one of the most exciting events on the circuit and also as one of the most absolutely terrifying where we just hope no one gets seriously hurt or killed. Over the years, there has been some intense racing, some spectacular finishes, some nasty wrecks and injuries, and some absolute debacles as INDYCAR has attempted to find a safe and yet competitive package, particularly after the death of Dan Wheldon in 2011 at the similar Las Vegas Motor Speedway.

The banking at Texas, while fine for NASCAR, makes this track borderline unsuitable for the series’ cars. Champ Cars proved unable to race there, with CART ultimately canceling a race here in 2001 after symptoms of dizziness and disorientation were reported by nearly all the drivers as a result of 230 mph-plus speeds and sustained G-loads as high as 5.5. While those particular issues have never developed forINDYCAR, it’s still been a bit of a challenge to make this speedway work for open-wheel cars.

So what should we expect this weekend? Much in the same vein as we never quite know what to expect in NASCAR on a restrictor plate track, we’ll just have to wait and see.

The news is the tweak that INDYCAR is making to the aero package for Texas this year. Teams will have the option to add about 300 pounds of additional downforce over what they were allowed in 2013. The tradeoff for the added downforce is about 50 pounds of drag on the chassis that will slow the cars. The overall effect will be less drop-off in the tires through a fuel stint.

Firestone and teams had input on working out this package with INDYCAR during an April test session at the track. Firestone is providing the same tire specification used at both Texas and Auto Club Speedway in 2013. The package puts the cars closer to the specifications used in 2012, a package that was very popular with drivers and spectators.

Texas Motor Speedway is a 1.5-mile oval banked in the corners at 24 degrees, the highest banking the Verizon IndyCar Series competitors will contend with during the season. The IndyCar Series has competed at Texas every year since the track opened in 1997. Race distance is 248 laps for a total of 372 miles. The defending race winner is Helio Castroneves, while teammate Will Power sat on the pole in last year’s race. It’s a Saturday night show, with television coverage starting at 8 p.m. ET on NBC Sports Network. Radio coverage will be available on the IMS Radio Network and on XM 209/Sirius 213.

Will Power recaptured the Verizon IndyCar Series points lead with two strong performances last week at Belle Isle, while former points leader Ryan Hunter-Reay struggled. Power now leads his Penske teammate Castroneves by 19 heading into Texas. Hunter-Reay fell to third, 27 in arrears. Simon Pagenaud and Marco Andretti round out the top 5. Defending Verizon IndyCar Series champion Scott Dixon is in eighth, the highest-placed of Ganassi’s drivers in what has proven to be a dismal season so far for the organization.

Takuma Sato. The honeymoon continues for SuperTex and Sato, it seems. Team owner A.J. Foyt loves the fast and aggressive style Sato brings to the team, even if it does sometimes bring inconsistent results. This is the home race of the Foyt operation, and while Sato has taken the team to victory lane on a street course, he’s looking to give the team its first oval win since 2002. Sato has put together some solid oval runs in the past; now he just needs to keep from getting overly aggressive.

If you were not in favor of the idea of the Grand Prix of Indianapolis, the new race that kicked off the month of May in Indy on the road course, you better get used to it. The Indianapolis Motor Speedway announced earlier this week that Angie’s List has signed on to be the entitlement sponsor of the event though 2016.

“The inaugural Grand Prix of Indianapolis was a great success and provided an ideal way to begin the Month of May at the Indianapolis Motor Speedway,” said Mark Miles, CEO of Hulman & Co., parent company of IMS. “The event exceeded our attendance expectations and drivers and fans alike seemed to really enjoy the challenge that the road course here at IMS provided. We’ve created significant momentum moving forward and with the help of our new partner Angie’s List, 2015 should be even more exciting.”

I think we’re watching Helio Castroneves climb the fence again in Texas. Penske is hot and he’s won there four times before, so Castroneves has a flair for this unpredictable track. Huston Ladner is going with Scott Dixon because he’s thinking sooner or later the Chip Ganassi Racing slump has got to end, right? Giving all of the big three some love, Matt Stallknecht is going with Marco Andretti.

After a hectic four races in three weeks, the Verizon IndyCar Series will take a two week break and come back the weekend of June 28 and 29 for another double header, the Shell and Pennzoil Grand Prix of Houston. These races run on a temporary street circuit set up around Reliant Park, the city’s sports complex. Both races go off at 3 p.m. on NBC Sports Network.