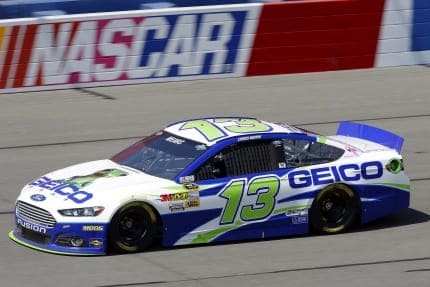 For some of NASCAR's small teams, finding funding to race has been a huge challenge.

Sponsorship woes: it seems like they’re everywhere in NASCAR these days, and the reality is that they are. Even some of the sport’s biggest names, including a perennial Most Popular Driver and a three-time champion, have struggled to sell an entire schedule of races to backers this year, and many of the smaller teams are stretching race-to-race just to get to the track and sometimes even face the badge o f shame that pulling into the garage early has come to carry.

But there have been a pair of bright spots as two of the smaller teams in the garage have nailed down full-season sponsorship for 2013 and beyond. FAS Lane Racing, owned by former Cup crew chief Frank Stoddard, announced this week that OXYwater will sponsor the No. 32 Ford for 24 races this year, and a full season in 2014 and 2015. Terry Labonte will pilot that car this weekend at Bristol, and Timmy Hill and Ken Schrader are also expected to drive in select races. Stoddard and his team toiled as backmarkers for two seasons with a variety of drivers, cracking the top 20 just three times in 75 races, all at restrictor plate tracks. Stoddard and Co. never gave up hope and didn’t resort to parking early, and that appears to have paid off after this week’s announcement.

Granted, the deal should probably be viewed with a bit of a critical eye; OXYwater is an upstart company, and the deal is, of course, contingent on its success. It’s happened before that similar small companies have inked deals with teams only to disappear a few weeks or months later when the funds dried up. But the upside is that this company chose to use NASCAR for a large piece of its marketing, and provided that they stick around, has helped a small team get its feet underneath it.

Earlier this year, it was quietly announced that GEICO would step up its sponsorship of the No. 13 Germain Racing Ford and driver Casey Mears, sponsoring the full schedule in 2013 and 2014. Mears has gotten off to a decent start in 2013, running competitively all week at Daytona before being taken out of the 500 in an early crash, and following that up with a 14th-place run at Phoenix. Mears struggled at Las Vegas (which was not surprising; the intermediate tracks quickly separate the haves and have nots in racing) but was very strong at Bristol in August and the team is hoping for another good week.

The Germain family has had considerable success in NASCAR, winning the 2006 and 2010 Truck Series titles with Todd Bodine, but the team has struggled in Sprint Cup competition, often being forced to park early to preserve equipment at races where GEICO wasn’t footing the bill. GEICO had added more races to their schedule in 2012, and this year decided to make a full commitment to Mears and the Germain Racing team. GEICO is the more stable of the two companies, having been in the auto insurance business for years and having several advertising campaigns in a variety of venues, and seeing them up their commitment each year with a team that has potential is encouraging.

*Why sponsoring a small team is mutually beneficial*

NASCAR sponsorship, and in particular sponsorship of a small team, is not without risk. But there are obviously positives for the companies doing it. For one, it’s an opportunity to get into the sport on a lower budget than the big teams demand. While a $5 million investment is hardly a drop in the bucket, it’s also not the $15-20 million and up the big teams command. While a company could go with a bigger team for a handful of races, its presence at the track will be limited going that route. For one thing, they won’t get as much of the driver’s time if they sponsor a few races-drivers are committed to their larger sponsors, and a one-off might get them an appearance at hospitality on Sunday, but is unlikely to include things such as commercials or corporate appearances away from the track. If they’re a full-time sponsor, it’s likely that they can work some of those perks into the deal, which gives them more bang for their buck.

It’s also easier for a team, sponsor, and vendor to put together a package for souvenir sales if the deal is for more than a handful of races. While the small teams don’t always have a souvenir rig at the track, they generally do some online, and having a sponsor can offset production costs and give the sponsor additional exposure via fans buying and wearing or using those products. Again, that’s good for both team and sponsor.

NASCAR fans are notoriously loyal to sponsors and will often go out of their way to purchase a product from a sponsor of their favorite drivers (or to shun the sponsors of a rival; how many Matt Kenseth fans will now actively avoid Lowe’s?), and for a company like OXYwater in particular, that could drive sales. It’s likely that fans of Labonte, Schrader, or Hill, at least will try the product if they see it in stores, and if they like it, they’ll keep buying it. Other fans as well may buy a product that they know sponsors a team or driver over one that doesn’t. By being the primary sponsor on a smaller team, a company is seen by more people and is more likely to be remembered due to multiple sightings than one who is on a car for a race or two. Even the small teams have fans, and those fans do go out of their way to support their drivers via their sponsors.

Overall, a company looking at NASCAR sponsorship as a marketing option basically has three choices: Sponsor a big team, sponsor a smaller team, or become an official partner of NASCAR. A fourth option is to be a track sponsor. Sponsoring a big team is more likely to get more TV time, but it costs as much as four times as much for a full season. They can go for a few races, but that limits exposure with fans at the track and cuts down on other options. A small team is less expensive, and if the team improves, they will get noticed. Plus the fans are just as loyal, and some fans will go out of their way to support the company. Being a partner with NASCAR may also be cheaper and get decent exposure, but it’s not as enticing to corporate types or clients and fans who use products from car sponsors might be more reluctant to support NASCAR’s official whatevers because they feel that they were poached away from teams. Track sponsorship gets TV and fan exposure, but again, fans are more likely to support a specific driver than a specific race track or track corporation.

Looking at the options, it’s clear that sponsoring a small team does make sense in many ways. But it’s not without risk.

When a sponsor signs on to pay for a season of racing, rarely is it from the goodness of someone’s heartâ€”it’s a business decision. And for some sponsors, it’s not an easy one. A sponsor is generally buying a few things. One of those, as mentioned above is the driver’s time, whether it’s for at-track appearances with fans, commercials or corporate visits, or hospitality visits with VIP’s and clients. Those, they will get, and probably get plenty of no matter who they sponsor. In fact, they might get more than if they had gone with a big team, even full time, because they still have to share the driver’s time with NASCAR sponsors and personal backers. A smaller name driver will likely have somewhat fewer obligations.

They also pay for exposure to fans or, in some instances, other companies. They get that exposure in two ways: being seen by people at the track, in the stands or in the suites; or by being seen on television broadcasts. Again, as long as they don’t suffer any kind of mechanical failure or crash during a race, they’re going to be seen at the track just as much as any other sponsor. If they couple the race with an autograph session for fans, they get maximum face time at the racetrack each week, and again, that could be easier for a small team’s driver.

What they are not guaranteed is the television time. In fact, unless they are running exceptionally well, racing with a big-name driver, or get involved in a crash, they’re unlikely to get any TV airtime at all. And that’s where it makes it tough for the sponsor. For a cost that’s likely similar to or possibly less than that of paying for the space on the car, a company can buy a commercial slot and guarantee that their brand will be seen during the broadcast. Since a company can’t sell its product to even the most loyal fan if the fan doesn’t know about it, not getting the broadcast time is a real issue, and I suspect, one that keeps more small-to-mid-sized companies from signing on with teams.

So, while a company does get some guaranteed benefits from sponsorship, without TV airtime, they may simply not justify the cost of supporting a team. And if they don’t feel there’s enough return on their investment, a company won’t sign on with a team. It wouldn’t be smart business, so it’s hard to blame the companies for not lining up to sponsor a race car when they can buy a commercial, rent a driver for a few hours for the commercials, and, if the ad is clever, guarantee that fans will see and remember their product during a race broadcast.

So while sponsorship can be a great way for a company to gain traction in a market or attract customers, simply putting their name on a car isn’t a guarantee that either will happen. It’s a gamble, not a sure thing. For a company like GEICO, it’s turned into a sure thing as the team improves. Casey Mears is the consummate pro at appearances with his friendly demeanor, so that situation is a true win-win. The team can race and improve, and GEICO gets more and more out of it as they do. That’s how it’s supposed to work.

For FAS Lane, this new deal with OXYwater is a bit more tenuous; it’s a less established company and a less-established team. If it works, both will benefit, if it doesn’t, one or both could lose their best chance to succeed in a competitive business. Either way, it’s a decent risk for both sides, and it’s a microcosm of the way the American Dream is supposed to work.

Itâ€™s been encouraging to see some teams find sponsors amid widespread worry about finding backers. On one hand, it’s just two teams among many, but on the other, it’s two teams who didn’t have full season sponsorship before, and any time that happens in NASCAR, it’s good for everyone.