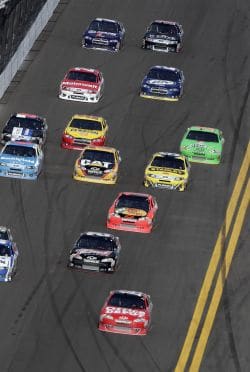 _Editor’s Note: Have you not signed up “for your FREE Frontstretch Newsletter”:https://frontstretch.com/notice/9557/ in 2013? If you haven’t heard, it’s a daily edition we put out Monday through Friday with NASCAR news, commentary, interviews, and information you can’t find anywhere else on the site. Every Wednesday, we’ll have a little commentary like this one exclusive to the Newsletter; like what you read from Kevin? Then be sure to sign up with the link at the bottom of this column…_

Let’s be real — the allure of the pre-Daytona 500 Duels has been, for a few years now, fairly understated. Rather than a high-drama, high-stakes double shot of restrictor plate goodness prior to the big show, with a myriad of drivers racing for their spot on the starting grid, the top-35 rule of recent years eliminated a lot of no-holds-barred competition down the stretch.

The Duels at Daytona, for many in recent years became little more than a glorified test session. Will fewer drivers locked into the race in 2013 ramp up the excitement for these qualifying races?

Instead, the Duels became a bit of a test race, especially for teams that didn’t field an entry in the Bud Shootout, or Sprint Unlimited, or whatever it was called in a given year. With 35 cars locked in no matter what happened, save for a drastic measure such as a withdrawal, only the teams outside that cutoff really had much to fret over.

And sure, there were the feel-good moments, like Brian Keselowski getting a push from brother Brad into the 2011 race after running relatively slow all week. But gradually, the Duels lost their shine. Yes, it became an off-kilter way for NASCAR to set the field at its Super Bowl, but mostly, the cars one expected to make the race ended up doing just that.

Thank goodness the boredom is just one week away from changing.

For NASCAR’s 2013 iteration, the sport has returned to a policy in line with its past, prior to the top-35 rule. For most races, the top 36 cars in qualifying are in the race, with the next six spots going to the top six teams in owner points that weren’t already in the original 36. The final spot goes to a past champion not already qualified, or a seventh driver from the owner points rule if such a driver does not need the past champion’s provisional.

But for the Daytona 500, nixing the top-35 rule means that the top six in qualifying are locked in before the Duels, with the front row locked after qualifying. But finishing in the top 15 in one of the Duels also ensures a spot in the race. From there, positions 33-36 go to the fastest in qualifying not finishing in the top 15. Numbers 37-43 refer back to owner points (in this case from 2012), like other races.

It’s early to say whether this change will make a difference in the Duels or even in qualifying for the 500, but chances are it will. In theory, the seventh-place finisher in owner points (in this case, the No. 17 and Ricky Stenhouse, Jr.) could miss the 500 if he/she does not have a quick qualifying time and doesn’t finish in the top 15 in his/her duel. This DQ is, of course, assuming that the top six in owners points experience the same issues, so it’s a bit far-fetched but definitely possible.

It’s more likely that a mid-tier team, one that might not challenge for victories each week but is still a fixture at each race, could be sent packing Thursday. It’s also more likely that smaller organizations, even those in one-off shots for glory in the 500, can make the race as long as they’re up to par.

There are some possibilities here. I know I’m excited.