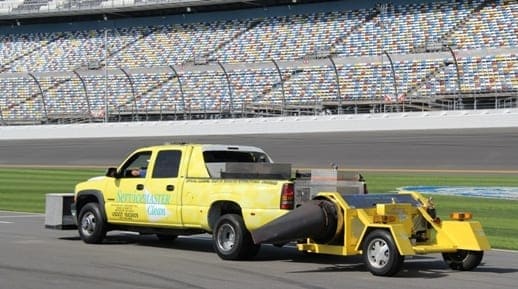 Quick! Do you remember who won the 54th running of the Daytona 500 on Monday night, February 27, 2012? I didn’t think so. Hey forgetful, it was Matt Kenseth! But what do you *really* remember about that race?

If I was a betting man, I’d be willing to wager that if you remember anything about the 2012 Daytona 500, you have visions of the red and white Target car sliding out of control into a yellow jet dryer, setting off a huge explosion. Because the images that people can’t forget, that scene was the event in question lap 160 during a ServiceMaster Clean Caution Period.

The No. 42 Target Chevrolet Impala from Earnhardt Ganassi Racing, driven by Juan Pablo Montoya was just returning to the track after pitting under the yellow flag. Montoya was driving fast as he was attempting to catch up with the field during the caution. As he was approaching two ServiceMaster Clean sponsored yellow jet dryers blowing debris off the banked track in turn three, one of the trailing arms on his car broke. Montoya ended up losing control of his speeding race car and he skidded sideways into a trailer-mounted jet engine filled with 200 gallons of kerosene.

The most enduring image of the 2012 Daytona 500 was that of the now familiar yellow ServiceMaster Clean safety vehicles. While one met its untimely demise at the hands of Juan Pablo Montoya’s out of control No. 42 car, the others helped salvage the speedway, and ensure the finish of what had been a tumultuous weekend for the Great American Race.

For a little more than two hours, the world watched live as track personnel tended to the fire and cleaned up the mess, after safety crews had helped Montoya and the driver of the jet dryer escape with minor injuries.

From the added television exposure of the ServiceMaster Clean logo on live FOX coverage and all the highlight footage of the fiery carnage online and on the news, ServiceMaster Clean’s creative sponsorship package and a little bad luck, benefited them more than any other NASCAR official sponsor during this 54th Daytona 500. This incident provided arguably the best sponsorship plug for a NASCAR official sponsor in the history of the sport.

ServiceMaster Clean is a janitorial and disaster relief small business, based out of Memphis, Tennessee. They are part of the ServiceMaster family of brands that include TruGreen and Terminex, to name a couple ServiceMaster companies. ServiceMaster is a privately held Christian-oriented Fortune 500 company, founded in 1929, with a franchise network employing over 50,000 people.

Should you ever suffer the indignity of spilling and igniting 200 gallons of diesel fuel in your driveway or have a car plow into your truck at 150mph, be sure to keep the number of your local ServiceMaster Clean franchise on speed dial; their results speak for themselves.

“With the program in general, we’ve been able to participate in a number of request for consideration and bid opportunities from businesses seeking our services that heard about us through racing. We are invited to participate in millions of dollars of opportunity annually and we can track our success at getting to the table directly to our involvement in this sponsorship.”

Prior to 2009, ServiceMaster Clean had no sports marketing experience. “As we looked at various opportunities, we saw that racing does a terrific job intersecting entertainment with branding,” according to Wassell. “Racing brings great visibility and opportunity for businesses and combines it with real excitement for loyal fans. We saw a unique opportunity for ServiceMaster Clean to activate and engage within racing in a way that would increase visibility in a relevant way.”

“ServiceMaster Clean is readily identified with a fleet of yellow vehicles so the yellow flag sponsorship fit us well. During a yellow flag, the race track is being cleaned and dried and it represents exactly what we do in homes and businesses across the country. We felt the alignment of these elements made this sponsorship very special, so we took advantage of it.”

Days after the crash with the jet dryer at Daytona, Montoya’s totaled Chevy was purchased by Dale Earnhardt, Jr. and placed in the race car graveyard on his Cleveland, North Carolina property among other wrecked race car remains. Dale Jr., has deemed these his, “lawn ornaments.”

Due to the worldwide recognition of this crash, many fans have tweeted that they would like to see the jet dryer on display at the NASCAR Hall of Fame. If that doesn’t work out, maybe Earnhardt, Jr. also has an interest in buying the ServiceMaster Clean turquoise-and-yellow jet dryer?