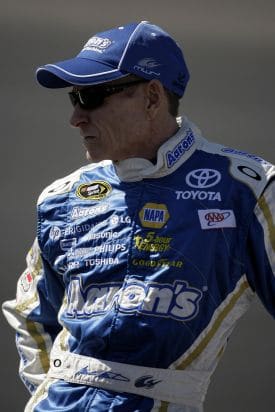 Mark Martin’s seat may be just a bit too small for Elliott Sadler to fit into comfortably.

*10.* Realized that a MWR Cup ride is a lateral move at best, compared to a RCR Nationwide ride (‘Bird in the hand’ so to speak)

*9.* Had brother Hermie and friend Ward Burton handling the negotiations and even Mikey got frustrated and tired of saying “What?”

*7.* Insisted on having a special pouch made for his cell phone in the race car ala Brad Keselowski, but it would have put the 55 team over budget.

*4.* Forgot to have his wife sign a permission slip

*3.* Turns out, Danica was scheduled to run those same five races and seeing as how she is now full time in NW, he’s had it “up to here” with women drivers.

*2.* Now that he’s gotten a taste of winning again, he doesn’t want to spoil it.

*1.* Just remembered that his favorite song is “I Can’t Drive 55!” By Sammy Hagar