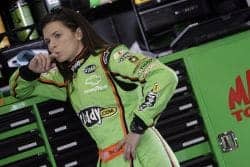 If my calculations are correct, 2012 marks the start of my ninth year of writing for Frontstretch.com. As some of you may remember, this column was basically the brainchild of several drunken racing fans after having drunken a few too many beverages in a small sports bar in a small town in the middle of a corn field in the middle of Iowa.

The ‘Voices’ in my head were (I think) the comments and slurred pontifications of my friends, acquaintances and a few people I really didn’t like, as we gathered every race day to keep various beverage companies in business.

While Iowa, the town, the cornfield and most of people are still in existence, the bar has long ago disappeared and the secret weekly gatherings are only lingering memories along with the ‘voices’ fading in my head. And therein lies another problem…as of last July, my head is no longer there either. I mean, I still have a head but it no longer is in Iowa. It in fact now resides in Knoxville, TN. Voices that used to sound normal now have a distinct southern drawl to them, all of which leads to this; in the interest of respectable and honest journalism for which I am known, continuing to call this column ‘Voices from the Heartland’ is…well, ‘it just ain’t right’!

While the editors have yet to agree on a permanent title, I’m leaning towards ‘Voices from the cheap seats’ because frankly, ‘Voices from near the Great Smokie Mountains National Park’ seems a bit pedestrian. Having said that, I will inform you that the content may be a bit different as well.

Instead of picking one single topic to rant on about for a thousand or so words, I now plan to have a few paragraphs on a variety of topics as they have come up over the past week. Kind of like writing with a shotgun instead of a rifle, so to speak. So, without further ado, lets get started.

*What to expect from Kyle Busch*

Remember the big crash last week during practice before the Shootout that mangled a bunch of cars? Well, to make a long story short, when interviewed after the fact, Kyle blamed the whole thing on the driver in front of the whole thing (names are not being used not to protect the innocent, but rather ‘cuz I can’t remember all of the parties involved) saying he saw the other cars coming up fast beside him and, for some unknown reason, moved up to block! Really, Kyle?

First off, that is not what happened as the replays clearly showed. Who would move up to block in practice!? It’s not a race, its PRACTICE!

I know it’s not that big of a deal but it really burns my butt when a driver tries to lay blame on someone else for some incident when they don’t have a clue as to what they are talking about. I realize that this kind of behavior, or perhaps more accurately, self absorbed view of the world is not unnatural for a Busch brother, but really…blocking in practice?! Surely he could have thought of a better one.

On the other side of the coin, as I said earlier this week in Mirror Driving, while I personally do not hold any love for either Busch brother, I will give credit where credit is due and give Kyle some big kudos for the saves he pulled off during the Shootout. Only a handful of drivers could pull that off. Too bad the talent doesn’t come along with a better, more likable personality.

So, the idiots that be NASCAR have decided that the famed General Lee from the old Dukes of Hazard television show cannot run a lap on the track at Phoenix because it has the famed ‘stars and bars’ emblazoned on it, eh? Well, here is what I think of that; (insert salute here!)

The Confederate flag is NOT about racism, slavery or anything else ultra stupid like that. It is about Southern heritage and pride plain and simple. Anyone who might be offended by it painted on a iconic car from a popular ‘70’s sitcom as it rides around a race track at a sanctioned event by a sanctioning body who owes its success to none other than those who hold it so dear is an ignorant bigot themselves! Besides, who cares what a very few handful of people may think!? Of the so claimed 75 million fans that NASCAR repeatedly boasts about, how many do you think may be ‘offended’? And more to the point, actually complain about it? 1000? 5000? Even if it were 10,000, which I sincerely doubt, that still leaves 74, 990,000 who are NOT or don’t care! Let me spell that out for you…seventy four million nine hundred ninety thousand!

You can’t please everyone ALL the time and NASCAR would do well to stop trying. Some people would complain if you hung them with a new rope! Other people just need to shut up and get over themselves!

Let me get the disclaimers out here first. Yes, that was a very hard hit that Danica took during yesterday’s qualifying duels. Yes, I KNOW that in open wheel racing, such as Indy cars, you BETTER let go of the steering wheel before you hit the wall or you will have broken wrists at best. Yes, I know that this is still a bit new to her….HOWEVER…

I have never, ever seen any of the other racers react in that fashion. And this isn’t the first time either. I “wrote about it”:https://frontstretch.com/jmeyer/28549/ in February of 2010, during Danica’s first ARCA race. It was funny then and I think it is funny now. Throwing your hands up around you head just before you hit the wall looks…well, so funny and girlish! I’m sorry, but there is just no other way to put it.

As with the Busch brothers, we may get sick of “Danica this” and “Danica that” but you got to admit, some of her racing videos (and heaven helps us racing analysis!) are very entertaining.

Stay off the wall, (but if you’re gonna hit, do it Danica style!)