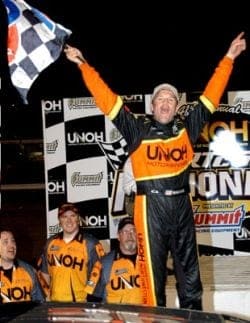 A lot of great drivers started at dirt tracks. To win four big dirt races over great racecar drivers like Kenny Schrader, Bard Hartman, the Dillon boys, Austin and Ty Dillon. To win three out of seven races in the Winter Nationals at Volusia-there were seven possible races and I won three of them-that’s unprecedented for our dirt racing team. I was really grateful. It was a big time for me and my boys and it was a Speedweeks we will never forget! 2012 has already been really special.

Kenny Wallace has won three of seven races on the dirt in Florida this week.

Billy Smith is a great racecar driver, and I’m really lucky to have him on my dirt team. He’s also a great fabricator and a great friend. I’ve got one employee and his nickname is “Billy the Kid” Smith, because he started racing at a very young age. Billy’s 36 now. He’s the glue that keeps my whole dirt racing team together. He’s basically become more of a friend than he has an employee. It’s really worked out nice; we’ve become more friends than anything. I told Billy we have to find a way to keep him around when I’m done racing and keep things going so he can always stay here and we can grow old together and hang out.

I started dirt racing a few years ago because I had never raced dirt. If you take a look around, guys like Tony Stewart, Jeff Gordon, Carl Edwards, Kenny Schrader, AJ Foyt, Dale Earnhardt are all great drivers –even Jimmie Johnson drove off-road trucks-they are all great drivers, and great drivers are not one-dimensional. We see all these great drivers who came from dirt. So I wanted to learn how to run dirt. People turn on the TV and they go, oh, NASCAR.” Well, you’ve got to think about where did those drivers come from? They didn’t just show up in NASCAR. Most of them were dirt drivers. So that’s what got me going. I’d say most great NASCAR drivers were dirt drivers. Dale Earnhardt was great on dirt; he won a lot on dirt back in the day. So that’s what got me hooked on dirt.

When you come to Daytona just for NASCAR, you are here for so long for so little. You come down and practice only on Saturday for two hours. Then you qualify on Sunday, and the track is closed Monday and Tuesday. I run my dirt car because if I don’t run my dirt car, all I do is hang out in my motorhome. I want something to do. Daytona is a lot of fun, but Speedweeks can also be boring if you don’t stay busy. My dirt car gives me somewhere to go every night. One thing about the dirt races is Jeff Burton was out there a lot, Tony Stewart was with me every night I won, Kenny Schrader, my brother Mike, my cousin Timmy, they came out a couple, three times. The dirt track is somewhere for people to go at night. Like I said, even though Speedweeks is exciting, what do you do? You hang out or go race. I like to go race.

I’m an overachiever. I never count on a gift. God has made it where things come to me hard because I can handle it. If Trevor Bayne had raced and run really well, then I’m locked into the Daytona 500. If not, then I’ve got to outrun a lot of really good cars. I (went) in thinking that I’m not going to get a gift. (_Editor’s note: Wallace failed to qualify for the Daytona 500 after a broken fuel pump ended his hopes in his qualifying race. If Bayne had raced his way in the first race, it would have locked Kenny in anyway, but Bayne was passed on the final lap. He is locked into Saturday’s Nationwide Series race_.)

As for what fans can expect in the Daytona 500, well, I would assume that everybody learned their lesson (in the Budweiser Shootout and the Duels). There’s been a wreck every damn time everybody’s gotten on the racetrack. When I did NASCAR Raceday before the Bud Shootout, they asked me what I though was going to happen, and I said, “It’s going to be the wreckfest of the century.” And I was 110% correct. They’ve never wrecked that many cars in a Bud Shootout, ever. It’s because we cannot race like we did last year. We have no downforce, no rear spoiler. The cars overheat right away, and then when they do try to push, they realize they can’t push because there is no downforce and no rear spoiler. The cars are not in the ground real hard. So I think what fans can expect is everybody at some time will have to start calming down. At some point, everybody’s going to learn you can’t do that. Everybody knows it right now, but as long as that one guy-Juan Pablo Montoya was the last one to try in Wednesday practice-he tried to push Kasey Kahne and he just got done wrecking Kasey and Kasey tweeted that he wrecked two cars in half a week. I expect to see a really calm Daytona 500 until the very end. The caution will come out with 20 to go like it always does. Then it will be Katy, bar the door, and they’re going to wreck again.

I like this racing. Tandem racing was two, two, two, two, and there’s not an even number of cars. If you’re left out, you’re done, and I don’t want the races to be decided on somebody else. I want to decide my race. I want to race 42 other cars. I don’t want a tag-team marathon. I don’t care if the car handles bad, I want it to come down to me in control of my car, not having to team up with somebody.

If I was President of NASCAR for a day, I would make the sport cheaper. But it’s a free enterprise, and I understand how it works.

We did a TV special called “Chasing Daytona-Kenny Wallace” that aired on Speed this week. Having the cameras around was fun for a while, but it also becomes stressful because you’re trying to ignore the cameras. When we did NASCAR 360, we got so good at it that we literally forgot they were there. They would literally rig our vehicle so nobody was in the vehicle with us; it was little bitty cameras. We would get going and forget it was there. In the scenes you see in this show, there were people. Everything I was doing was real, they just came with me. I didn’t do anything special for the show. Everything I did was me doing my real deal.