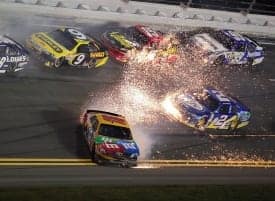 Saturday night’s Budweiser Shootout ended with Kyle Busch crossing the finish line .01 seconds ahead of Tony Stewart despite nearly crashing out of the event twice.
That was the good news.

The bad news is, NASCAR’s new tweaks to the Daytona rules have some tweaks of their own to get through before Sunday.

Kyle Busch had a near-wreck experience Saturday night in Daytona, not once but twice before pulling it together and charging to Victory Lane.

Busch was shot out of line in Turn 2 with 28 laps to go and headed down off the banking, scraping the front of the M&M’s Toyota at least three times. Normally, that’s a death knell at Daytona, but Busch did the unthinkable: he saved it. Not once, not twice, but three times. The car didn’t get to 90.1 degrees: it stayed more or less straight, and he continued with the hammer down.

“There aren’t many people, ever, who could have done that,” said Stewart after it was over.

It happened again with two to go, when Jeff Gordon started banging on the rear deck of the No. 18 car in an attempt to move him up the track. It did, and exposed the left rear quarterpanel. Gordon hit it again, and off Busch went, to scrape the car’s nose two more times on the apron.

Busch saved it. Again. Gordon crashed, and so did about half the remaining favorites.

After all that, several trips to pit road and a bunch of hard-nosed racing, Busch pushed Stewart to the lead on the green-white-checkered and slid down in front of Marcos Ambrose on the white-flag lap. He pulled the slingshot off Turn 4 and beat Stewart to the line by that .01-second margin.

It was sweet redemption for Busch, who had not driven the M&M’s car since last November — missing the sponsor for Texas and Homestead after crashing Ron Hornaday in a NASCAR Truck race at TMS.

“First time back in the M&M’s car and we’re in Victory Lane,” he said, referring to that fact. He was very humble, for Kyle Busch, and it showed that his punishment, for the moment, did make an impact.

Perseverance has not been a hallmark for any driver with the last name Busch in recent years. Kurt got in trouble at Homestead and lost his ride with Roger Penske. He landed with James Finch and could have had a hand in winning the Shootout for a second straight year had it not been for the second crash with Gordon and Kyle Busch.

Kyle, driving a car that looked more like a demo derby entry than a superspeedway car, came out of that unscathed, despite another scrape job, while brother Kurt and Gordon went back to the garage in pieces.

Gordon actually flipped and landed on the roof, the first time he’d ever been on his head in a NASCAR machine.

Lots of cars did that, and depending on what you thought about the racing, it could happen again on Sunday.

NASCAR went to some lengths to take away the two-car draft and bring back the “pack” that was the hallmark of plate racing. They got what they wanted… and then some.

The fans clamored for an end to the Noah’s Ark-style competition, and NASCAR gave it to them. There was a touch of it, because you can’t do this drafting without some form of push-me, pull-you, but not the dedicated tandem racing on display the past two years at Daytona and Talladega.

Yes, the pack racing was spectacular, no doubt. But it was also more volatile. The spoilers were reduced in size as part of that package, and they made the cars dance more than N’Sync. The lack of rear downforce, combined with the sideforce plates on the roofs of the cars, turned the racing machines into so many children’s tops when struck in the left rear area.

Right around they went, and the pack just made the racing more a high-speed pinball game than an exhibition. Ask Gordon. Ask Clint Bowyer, who nearly went on two scary rides instead of the one he took through the tri-oval off the bumper of teammate Martin Truex, Jr. Ask Joey Logano, David Ragan, Paul Menard, Michael Waltrip, Dale Earnhardt, Jr., Matt Kenseth… the list goes on.

Some say bad bumps are the only problem; they’re not. If the in-car camera is to be believed, the cars don’t stay still very long, even running in a straight line. Bowyer’s car wiggled into Turn 3 right before he got the bumper tap from Truex that sent him twisting off through the tri-oval.

So here’s the down-low: if NASCAR doesn’t add spoiler, or take back some of the changes it made to get rid of the two-car tango, all that momentum they had coming into the season will disappear like smoke from The Big One. If NASCAR adds some spoiler back, early enough to test before the Gatorade Duels, the cars might be a tad less twitchy. A touch stiffer in the rear springs might work if they don’t change the spoiler height, too. But the way it is now, the cars start to skate and can’t stop.

It’s funny how the balancing act works. For one night, Kyle Busch shed some demons and gained a few fans. NASCAR, after performing its own exorcism on what ills they thought ailed the sport, just gained a new demon. We’ll see what happens and if they change anything before the 500.

Remember, fans complained unmercifully about Noah’s Ark, and NASCAR reacted. Be careful what you wish for, though because it just might happen, and you wind up with the Budweiser Shootout, 2012. It was a great race for a lot of good reasons, but it was 75 laps. Sunday’s race is 200… and there are only 43 cars.

How many of them are running at the finish might just depend on what happens between now and Thursday.