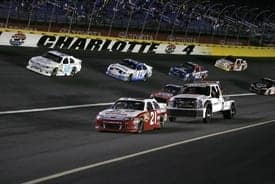 _Was the 2011 Cup season a good one, a bad one or a lousy one? Truthfully, there were moments this year that met all three definitions. One way or the other, what is conclusive is that the season is finally over. Before closing the books, let’s take a quick back look at some of the highlights, lowlights and abominations of this season’s NASCAR series…_

“For Part I of Matt’s Three-Part Series, Click Here”:https://frontstretch.com/mmclaughlin/36698/

Cars running out of gas were a common sight in 2011 as fuel mileage racing became the norm for teams finding it a necessity to pass through strategy – not speed.

*Fuel Mileage Racing:* From time to time, a race win will be decided by fuel mileage. It’s been going on since NASCAR race cars had whitewalls and tail fins. The race is not always to the swift nor the battle to the strong. But this year, it seemed that a ridiculous amount of races were decided by fuel mileage. What’s going on? At some of these cookie-cutter tracks, passing is all but impossible with these new cars the sport has to endure. Thus, crew chiefs began reverse engineering races, trying to get their drivers to slow down and save gas hoping to be able to complete the event with one less pit stop than the rival teams and drivers. Occasionally, like at Chicago it got downright bizarre with half of the top-10 participants running out of gas during the final few laps. Naturally, I prefer these sort of races just play out rather than having NASCAR throw a bogus caution flag with ten laps to go to allow everyone to pit, but I sure do miss the days when races were determined by MPH, not MPG.

*Tandem Racing:* Something curious happened prior to this year’s Daytona 500 and it was evident even in pre-race practice. Rather than running in the traditional huge packs, drivers were pairing up with a partner in tandems and two cars hooked together were substantially faster than a freight train draft. Speed trumped safety, in this case as the practice is a bit tough on the trailing driver, who can’t see what’s going on ahead of him thanks to the spoilers and rooflines of the car. So what could go wrong with a guy running at 180 MPH not being able to see where he’s going? How does sixteen caution flags sound?

Fans and the media were caught off guard by the new strategy, a bit unsure what to think at first. As one reader, Buzz, commented on my Daytona 500 recap, “Plate racing sucks. This sucks less.”

By the time Talladega rolled around, some drivers had what amounted to speed dial on their radios with the ability to communicate with up to eighteen other rivals. And, just like that with the lines of competition blurred the fans began disliking tandem racing immensely. NASCAR attempted to minimize the phenomenon, with new rules regarding plate sizes, coolant system pressure reductions and even not allowing the teams to grease their rear bumpers. None of it worked. By the second Talladega event, the final plate race of the season, that Cup event might have well had two dedicated partner’s vehicles chained together.

NASCAR seems to want to break up the tandems. And I want free cold beer to come out of the spigot on my kitchen sink. Will they be able to fix things? Recall that the plates at Daytona and Talladega were a “temporary fix” … about two decades ago. Fix the damn tracks and be done with it!

After five years of Chase invincibility, this Charlotte wreck last Fall became the final nail in the coffin of Jimmie Johnson’s dynasty. Can he bounce back to win a sixth title in 2012? That’s anyone’s guess.

*Jimmie Johnson:* By the standards of most drivers, 2011 wasn’t all that bad a year for Johnson. He did, after all, win two races (Talladega in the spring and Kansas in the fall) while scoring a total of fourteen top-5 finishes. He finished sixth in the points even after a substandard season and remained a factor in the Chase right up until Charlotte in the fall. In fact, when he won at Kansas only a week prior to that Charlotte race it seemed most pundits were ready to anoint him as a favorite to clinch a sixth title, especially with the circuit headed to the track Johnson has dubbed “My House.” But that all ended when Johnson stuffed his Chevy windshield deep into the frontstretch wall late in the Charlotte event in what might have been the most violent Cup crash of the season. Certainly, it appeared to be the worst hit Johnson has endured since that now infamous Busch Series wreck at the Glen many years back. Suffice it to say that all of Rick’s horses and all of Rick’s men couldn’t put that No. 48 car back together again. The following week, Johnson and team utilized a conservative and bizarre strategy at Talladega, riding around in the back of the pack to avoid wrecks. But in this instance, Johnson and his tow-mate Earnhardt never made the anticipated charge to the front late in the race. If Charlotte was the funeral for Johnson’s chances at a sixth title, Talladega just shoveled the dirt back into the grave. And so life goes. All dynasties come to an end, and the No. 48 bunch and Johnson had had a good run, nee a historic run. Plus, without demeaning the efforts of Johnson and every member of the team, from the guy who sweeps the floor right up to Chad Knaus, I think it was actually better for the sport as a whole to have a new champion this year. Next year? Who knows?

*Team Orders:* Fans have been dreading what team orders could do to our sport for years. This year, we finally saw team orders in action even if the principals involved want to deny it. At Talladega, Ford drivers were at least urged if not outright told that they were only to work with other Ford drivers. Not that Rick Hendrick’s teams were doing anything different. Before the transporters even rolled west towards Alabama, it had been decided that Johnson would work with Dale Earnhardt and Jeff Gordon with Mark Martin. That led to a bit of ugliness at the end, with Gordon losing his wingman and selecting Trevor Bayne to partner with in a marriage of convenience. But then Bayne’s teammate Matt Kenseth lost his wingman as well and Bayne left Gordon hung out to dry to help the No. 17. Earlier in the season, at Richmond in the fall, Paul Menard appeared to spin out his car on purpose to the benefit of his teammate Kevin Harvick. The folks at RCR say there was no intent on Menard’s part but the radio transmissions prior to the spin were pretty damning. Like it or not, the Pandora’s Box of team orders is now open in NASCAR. We’ll see how out of hand it gets next year.

*Attendance:* Yes, the size of crowds at many NASCAR tracks has been dwindling for years but attendance at some this year was outright embarrassing. Blame the economy, blame the price of gas, blame fan apathy after a few years of unexciting racing but whatever combination of factors is at the root of the problem it needs to be addressed fast. The size of the crowd for the Brickyard, once the largest for any race of the season, was particularly pitiful. Then again, who’d have ever thought you’d be able to walk up to the counter the morning of the Indy 500 and buy a seat to the event?

There were some signs the trend was at least abating late this year. Phoenix and Homestead were sellouts thanks mostly to an intriguing points battle. ESPN says ratings for their races were up a tick after years of decline, particularly in some choice demographics. Let me say this about the Nielsen numbers, though. If you’re marketing a racing series, it’s a lot easier to get a fan to commit to watching it at home for free on a Sunday afternoon then it is to get that same fan to commit to a long weekend, close to a thousand dollars in tickets and travel expenses and a nightmarish traffic situation after the race.

*Dale Earnhardt, Jr.:* While Earnhardt made the Chase this year, he still didn’t win a race. (OK, he almost won at Charlotte but ran out of gas exiting the final turn.) In fact, Earnhardt hasn’t won a race since Michigan in 2008 and he won that one on fuel mileage. He’s not the Intimidator. He’s not even the Imitator. He’s the Insipider. Earnhardt managed all of four top-5 results in 2011. In the 108 points races run from the 2009 Daytona 500 until this end of this season, he’s managed just nine top-5 results and that’s while driving for the sport’s superteam. The icing on the cake in 2011 was just 52 laps led, his lowest season total since running five races part-time on the Cup level in 1999.

Here’s a surprise. Earnhardt did manage to win the Most Popular Driver award yet again. (Ironically, an award his legendary father won only posthumously.) Nothing would help sell more seats to Cup races than the sport’s Most Popular Driver finally running well enough that fans considering attending a race would figure he’d probably lead awhile, most likely post a top-10 result and might even possibly win.