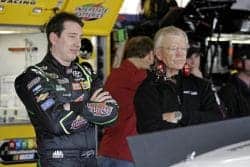 Wow! Lots of comments last week about the column, but that figures. Kyle Busch was the subject of a LOT of commentary all over the tube and the Internet. Some of them I felt almost obligated to answer.

Bob said, *“I say if Gibbs lets him go (which will only be because of Mars saying so) that Tony would take him in a heartbeat. Tony could promote he has been there/done that with the anger thing and upsetting a sponsor. If anyone can get Kyle’s head straight, it’s Tony and think of it this way – Tony is not gonna race too many more years and is Ryan or Danica gonna get him a championship? Kyle can if he gets his head on straight.”*

To which djones stated, *“I think KyB is even too toxic for Tony Stewart to hire him. LOL.”*

Well, guys, I have an opinion on this one as well. IF Tony had a ride available, I’d like to see Kyle TRY driving for him. For one thing, instead of getting one of Coach Gibbs’ inspirational speeches, he’d be taken out behind the woodshed for some old-fashioned attitude adjustment. I’m also not sure that Ryan Newman can’t be a championship contender. But then, he’s another one of “my” boys from my IRP days.

I have to thank the Old Farmer for saying, *“We all should have known – and expected – that you would have the logical response to the Kyle Busch scenario. Congrats for having a cool head about the whole thing rather than a raving lunatic ‘off with his head’ attitude.”*

If Joe Gibbs and Kyle Busch were to ever cut ties, could Tony Stewart of all owners be the one to try and control Busch?

Old Farmer, I guess I’ve mellowed. As a matter of fact, the process may have begun late in my career in the flagstand. I can recall once after I had a discussion with a driver, the late Milt Hartlauf saying, “Potts, you’re maturing. I can recall a time when you’d climb down there and do everything but pull a man out of the car and whip him to get your point across.”

Fred Bidwell writes, *”As an old ASA fan from the times when Trickle would arrive late, start at the rear and win, and attending a lot of ASA races back when there were real racers, not just drivers – whatever happened to the announcer that I remember especially from the Dri-Powr 400s at Winchester – Garry Poindexter? I can still hear his voice.”*

As can I, Fred. Garry is still among us, I believe working in the Cincinnati area, although he’s not announcing any that I know of. As “The Voice of ASA,” he knew the drivers, knew the sport, and tried to give all the information he could to the fans to make the events more interesting for them. I’ve tried to follow his example and that of my friend Frank Scott and an old mentor, the late Charlie Ryle, as my career moved into the announcing field. We still correspond by e-mail.

Drive Back to the Past With John Potts’ new book, a collection of historical stories from racing started right here at Frontstretch.com. Contact John to get your hands on a copy today!

Billy Jackson wants to know, *“Did Phoenix screw things up by paving that area inside the dogleg on the backstretch? Seems like the ‘dive bomb’ technique had a tendency to mix things up a lot.”*

Not sure if they screwed it up, Billy. Another old friend, Pancho Carter, used to say that anything between the fences was part of the race track unless other rules were put in effect. I can remember him telling Sam Hornish, Jr. that when he was spotting for him. The move that eventually ended with Elliott Sadler getting crashed looked like one of the old “slide jobs” that Mike Bliss used to do at Indianapolis Raceway Park. The difference is that Bliss and others did it in open-wheel cars, and the slidee wasn’t as likely to tap the slider.

Keeping them off that new pavement wouldn’t have been difficult. All they had to do was move those painted logos from the inside of the pavement out to within a few feet of the track.

I can promise you nobody was going to want to try to race over that kind of surface.

Well, the editors say this is the last “required” Potts’ Shots for this year, with the NASCAR season coming to a close. However, if you readers will keep the questions and comments coming, I’ll try to answer and comment on my own if the editors will allow me and Jimmie Johnson doesn’t lock me in a port-a-john. (By the way, J.J. – that was another one of “my” boys in there.)

Not promising to do so every week, but let’s see how it works out. This has been fun.