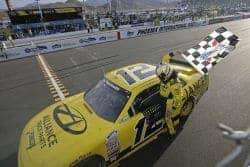 Saturday’s successful run for Sam Hornish Jr. just might herald the start of something great.

It’s hard to believe that Sam Hornish, Jr. was able to make it through his post-race interview this Saturday considering how much emotion he was obviously holding back in Victory Lane. This win was a very long time coming for a driver that’s been accustomed to winning, having scored multiple IndyCar and Indianapolis 500 trophies in another life. What’s more, it was a return to relevance for a driver that seemed doomed to the graveyard of so many open-wheelers before him that tried to transition to stock cars and failed.

After all, Hornish was far from ready when Penske Racing and Mobil 1 decided to throw him in the deep end (Hornish went two for eight in qualifying for Cup races before his first full-time season)… and boy, did it show. Though there were promising runs here and there, Hornish was continually tearing up cars and was never a factor on NASCAR’s top stage the way he was in IndyCar. And when Mobil 1 departed for the greener pastures of Tony Stewart — perhaps the most successful open-wheel convert of the modern era — Hornish was left in racing purgatory. Only the loyalty of the Penske Racing camp gave him a part-time Nationwide ride, one that came together only by taking shop personnel here and there to put together an ad hoc crew.

Hornish made that work, and that says a lot in its own regard. Even before winning at Phoenix this past weekend, the Defiance, Ohio native had posted four top-15 finishes in his last five races. The fifth event, of course was the summer event at Iowa that saw Hornish as a threat to win driving Brad Keselowski’s vaunted No. 22 car before suffering a late tire failure.

To be that successful in a part-time ride is significant in today’s Nationwide Series. More importantly, Hornish now knows full well just how hard life is outside the front of the field. Having spoken to the man at Daytona back in February before his first Nationwide start this season, it was abundantly clear that as grateful as he was for the opportunity to stay in a car, even part-time, he was out of his element… back of the garage, in a quiet hauler with an uncertain future.

Now that’s he been in the dark, and seemingly clawed his way out (rumors are still running rampant that Hornish will be in the Nationwide Series full-time in 2012), the driver is now a dangerous combination. He’s got the perspective of what life is like away from the top tier of motorsport; and now, with seat time he should have gotten years ago, this open-wheel talent is finally figuring these stock cars out.

Should a sponsor come, Hornish will be a threat in 2012.

*TWO: Can Red Bull Racing Keep This Up?*

Even our own, “longtime writer Matt McLaughlin used the words”:https://frontstretch.com/mmclaughlin/36413/ “a notable achievement bordering on remarkable” when describing how Red Bull Racing’s No. 4 team pushed all the tension regarding their employment futures out the window and scored the organization’s second ever Cup win Sunday. Remarkable, it was. A band of employees that will likely be unemployed this time next week were top of the heap in the world’s most competitive motorsport.

Despite that triumph, though, the future is still very tenuous for this once fledgling Cup operation. No matter how much Jay Frye is working, a deal will not be in place to save this team until well into the offseason. That’s assuming not only that the organization finds sponsors, but investors and ownership as well… a longshot proposition when combining all three. Red Bull Racing has accomplished a great deal in their short time in Cup racing, but have hardly been roughing it; they’ve had plenty of manufacturer support from Toyota since day one, a full-time professional pit crew, etc. That’s not overhead which comes cheap.

What’s more, though, even if they do find the backing and dollars needed, duplicating the type of motivation that translated into victory this weekend will be tough… contrary to this organization’s past history. History shows that the up and downs for this operation are hardly smooth. After a hideous 2007 campaign, A.J. Allmendinger rebounded in 2008 to get Red Bull’s then No. 84 car into the top 35 in owner points, only to be released. Then, despite having a car leagues ahead of where it was when they first signed Allmendinger, new hire Scott Speed then ended up falling out of the top 35 himself, missing multiple races in his rookie season as if that improvement never happened. On the other side, Brian Vickers and the No. 83 team never recovered from his fallout due to blood clots last season. And as great a feat as it was for the No. 4 team to put Kasey Kahne in Victory Lane, let’s not forget that Kahne and Kenny Francis are a rather formidable pairing… and it still took them 35 races to cash in on their one-year “temp job.”

Red Bull Racing first found a win on August 16, 2009. It was two years before they did it a second time. And one can’t help but wonder if that magic can be summoned once more within two years… if ever, again.

*THREE: Is There Upside for TBR’s Geoff Bodine Project?*

Longtime veteran Geoffrey Bodine secured a limited sponsorship package this summer that returned him to Cup racing. Problem is, being outside the top 35 was not a kind place to be, as Bodine DNQ’d Tommy Baldwin’s No. 35 car in four of his first five attempts. Needing to find that sponsor some exposure, Bodine replaced regular driver Dave Blaney in the team’s locked-in No. 36 car for the past few races. While it’s worked out so far (Blaney has timed his way into the field in the No. 35 for each of the three weeks of that experiment), what it has not done is improved, or even maintained, the performance of the team’s flagship car. Bodine has finished 38th and 37th in his two starts, involved in multiple incidents at Phoenix and bowing out less than halfway into the event.

So far, Geoff Bodine’s tenure with Tommy Baldwin Racing has been characterized more by off-track repairs after wrecks than on-track success.

The top 35 isn’t a concern; with the TRG No. 71 car struggling to even make the field, Baldwin and team will be locked into the 2012 Daytona 500 regardless of whether sponsor Golden Corral re-ups for next year. But in terms of added value, does getting Bodine’s sponsor some guaranteed track time outweigh pulling the team’s regular driver in Blaney from the organization’s one full-time ride? It’s hard to understand how it does… after all, barring a miracle, the 62-year-old Bodine will not be TBR’s driver come February.

This team has come a long way in getting a sponsor and locking into the Cup field. That makes Speedweeks a lot less stressful, but that only lasts for so long. The No. 36 team is still towards the back of the field, and staying locked in isn’t a foregone conclusion. And because of this move, Blaney’s got four fewer races of learning to do in his regular ride.

*FOUR: Kimmel Leaves His Own Team*

Frank Kimmel’s run of eight consecutive ARCA Racing Series championships ended in 2008 after leaving his longtime home at Tri-State Motorsports to start his own team. In that time, Kimmel has managed to stay sponsored and a threat for the driving crown year after year, but has posted only three wins in that time (none since 2008). This season, under a barrage from Richard Childress Racing and a full-time campaign by the Roulo Brothers, Kimmel finished third in points, but had only a precious few races where the No. 44 was a contender for the win.

That being said, from a performance perspective, Kimmel’s move to ThorSport Racing for 2012 makes sense. ThorSport has been a prime contender in the Truck Series this season; there will likely be some growing pains, but this Midwestern organization is located in ARCA’s backyard. They will figure out their new series quickly.

But the move goes even further. Kimmel’s got a son coming through the ranks (he ran a number of ARCA races for his father’s team this season). This move, while away from owning his own operation with family on the pit box, suddenly has the Kimmel name involved with an established operation… and a winning one, at that.

The future of Kimmel Racing has yet to be revealed; should the team disappear, it would be a shame to see the owner/driver roster shrink. But this move will go a long way to ensure that the Kimmel name is going to be around ARCA for a long time to come. And if Will turns out to be half the ambassador for the sport that his father has been, that’s a good thing for all involved.

Carl Edwards vs. Tony Stewart. The stats say it’s been a fascinating battle down the stretch… but do fans agree?

Tony Stewart vs. Carl Edwards. The points are razor-tight, and the drivers are true heavyweights in their profession. Their final duel in south Florida will likely be a compelling show. But lost in that shuffle is what was the accomplishment on every driver’s mind at the start of the season… ending the run of Five-Time.

Sure, that’s a guarantee after this weekend’s race at Phoenix. But isn’t there something missing about having the No. 48 not being toppled over, quietly fading into the foreground instead? Yes, NASCAR is firmly capable of having a championship battle without Jimmie Johnson… but the sport has been in the midst of a dominant spell that has rarely, if ever, been seen. Like it or not, that’s been the story the sport has pinned itself on for half a decade.

Trevor Bayne’s win in the Daytona 500 this year on the 10th anniversary of Dale Earnhardt’s death was significant not only because it was a huge upset, but because he was a fresh face and moment of catharsis for a sport that was still hurting. Johnson’s run is not as significant an event in the sport’s history, but it’s still one that needed to end itself on the track in a moment where one driver ended it. Instead, as two big names duke it out, the villain and behemoth they are toppling will be absent. It’s an absence that will be felt this Sunday.