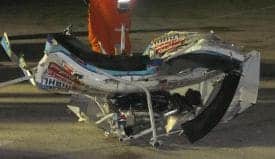 *Did You Notice? …* The degree to which the mythical “debris” caution has taken over at intermediate tracks?

Every once in awhile, there’s real debris on the racetrack. But how many times have some of these cautions been called for safety issues that simply aren’t there?

With eight races down in the Chase, I decided to turn a hunch into hard numbers. Let’s study the yellow flags for the four 1.5-mile ovals, races that were dominated by track position, not side-by-side competition this playoff:

What do those numbers mean? Roughly 64% of caution flags by NASCAR have been called by a little piece of metal, the threat of oil or simply slotted into the 400 or 500-mile distance because of rain that washed away rubber the night before. Those types of decisions, of course, are typically far more subjective then when a wrecked car is sitting up against the outside wall.

Such a pattern is problematic for NASCAR for two reasons. Number one: these discretionary yellows have the distinct possibility of affecting the outcome of a Chase race. It’s my belief you can find debris anywhere, anytime on a racetrack with 100,000 fans in the stands and 43 race cars rubbing metal. It’s when you throw it that could affect the outcome; hurting the leader, let’s say, now faced with a short run to the finish in a long-run race car. Or on the flip side, it could even unfairly save a Chaser (cough, Dale Earnhardt, Jr., cough) poised to go one lap down. Kyle Busch’s wreck of Ron Hornaday, Jr. may be disgraceful, but hey, at least in that situation you know exactly what’s going on. NASCAR, in comparison has a passive/aggressive way to create the same result – armed with the excuse of “safety.”

But there’s also a number two that no one speaks of. What’s also intriguing is the number of wrecks at these facilities… or lack thereof. Nine cautions averages out to just 2.25 accidents per event, many of which run well over 400 miles. Kudos to NASCAR for putting on such a safe showing; at the same time, those numbers seem to lean towards a theory that drivers aren’t putting themselves at risk. If you’re not running side-by-side, especially at tracks where you’re doing little if any braking the chance for spinning around goes down significantly. With their cars handling wickedly when armed with the dreaded aero push, drivers are holding back on taking chances; that helps create a single-file parade and, well, 43 of the best drivers in the world don’t often wreck when racing a “cookie-cutter” track all alone.

More forced cautions, double-file restarts, title contenders running 1-2, fuel mileage finishes … and still, these intermediates have been some of the worst races I’ve seen NASCAR put together this season. When do you think they’ll actually address the actual problem… aerodynamics and points?

*Did You Notice? …* Speaking of points, Did You Notice? who the highest-finishing Hendrick driver in this Chase could be? Shockingly, with two races to go Jimmie Johnson has just a 24-point lead in the standings over Dale Earnhardt, Jr. The two sit sixth and seventh in the playoffs, respectively and all it would take is just one more J.J. spin to hand the HMS “title” right over to the No. 88.

Dale Earnhardt, Jr. is quietly closing out the season with solid performances that will likely pay off for the No. 88 team next season.

Who in the world would have predicted Junior ahead of Jeff Gordon and Johnson? Certainly not me. But in the midst of many other stories, Steve Letarte and company should be highly commended for a postseason that, barring a late collapse will end well above expectations. Sure, Earnhardt didn’t win a race but this result will in all likelihood be his first top-10 points finish since 2006. Yes, the beginning of this playoff was consumed by mistake after agonizing mistake; tire failures, broken sway bars, and saggy confidence from the driver’s seat were the early hallmarks.

But a funny thing here has happened along the way. Junior, for all intents and purposes continues to put his trust in Letarte even after a weekend filled with misfortune. For the first time, the crew chief gets 110% the following Sunday after a mistake, as if there’s nothing wrong… and you know what? That attitude has paid off as of late. Back-to-back top-10 finishes heading to Phoenix, one of Junior’s best tracks have put them in position to pull that elusive Victory Lane upset. Considering they tripped and stumbled through some long summer months, making the postseason by the skin of their teeth you can’t help but notice some promising growth that could pay off in 2012.

*Did You Notice? …* Some quick hits before we take off:

– We’ve talked many times in this space how the new points system rewards winning less, not more. There’s no greater proof than in how the Chase standings would look under the old system – see below for a comparison:

Certainly, nine points is not a landslide. But the point remains the guy who won four times in eight races would be the one on top of the standings.

More bonus points for winning, anyone?

– Sometimes, car owners overthink it. According to reports, Richard Childress Racing will move No. 33 Cup crew chief Shane Wilson over to Jeff Burton’s team effective next season. Luke Lambert, the interim head wrench will get shuffled, assuming the same role in the Nationwide Series.

But why? All Lambert has done is take a supposed “washed-up” veteran, without a top-10 finish this season when he came on board and develop the team to the point they’ve challenged for victories in three straight weeks. In the process, he’s made daring calls like staying out on old tires at Martinsville, then gambling on fuel during the final laps at Texas to keep his team relevant while rebuilding. Notice no other organization even had the guts to try what Burton did at Texas, the reason I like these young engineers-turned-head wrenches like Lambert and Martin Truex, Jr.’s guru Chad Johnston. In several races where passing has become almost impossible, you have to run the race from the pit box without fear; clearly, Lambert is living life on the edge. And it’s injected a boost of energy into Burton.

Sure, Shane Wilson may have more credentials, doing an impressive job with Bowyer’s team the past two seasons. But why mess with a blossoming chemistry, especially when the CAT car was running like a bulldozer the first six months of the season? Sometimes, when the resume says “experience” that’s not always the right answer.

– The silence, up to this point in the week from Joe Gibbs Racing and M&M’s has been somewhat surprising. I really thought we’d have an answer by now; at the same time, Joe Paterno and the Penn State scandal has clearly pushed any national news from Kyle’s antics to the backburner. At least the million-dollar question of “what will they do?” won’t come paired with hundreds of national media gathered outside the marketing office. I think that helps Kyle’s case a little bit.