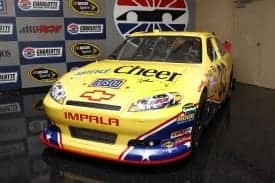 MINNEAPOLIS – (November 8, 2011) – The No. 33 Richard Childress Racing Chevrolet driven by Clint Bowyer at the Phoenix International Raceway will carry a special message during the NASCAR Sprint Cup Series event this Veterans Day weekend. The design, unveiled at Charlotte Motor Speedway in October, features the message “send Cheer” to encourage fans to send thanks and spread cheer to military families whose loved ones are serving our country.

The paint scheme is part of a partnership between Cheerios and the USO to help support military families by sending “Cheer” postcards from the front of specially marked packages of Cheerios cereal found in stores through November, 2011. People can simply cut out the postcard from the box, write a message of thanks on the back, add a stamp, and mail the pre-addressed postcard to the USO. The USO will deliver the postcards to military families at events at USO centers across the nation.

“I can’t thank General Mills and the USO enough for their support this weekend at Phoenix,” said Clint Bowyer, driver of the No. 33 Cheerios/Hamburger Helper Chevrolet for RCR. “It’s a really cool paint scheme and I’m excited about driving it. I hope it encourages everyone out there to ‘send Cheer’ to our nation’s military families.”

In addition, Cheerios and the USO will host nearly 100 military family members at the Phoenix International Raceway this Sunday for the Kobalt Tools 500. Guests will be from nearby Luke Air Force Base, Army National Guard’s Papago Military Reservation and wounded warriors. They will have the opportunity to meet Bowyer prior to the event.

“We are very excited to visit with the military family members and see Clint race the ‘send Cheer’ car this weekend,” said Erin Pisca, Integrated Communications for Cheerios. “We hope the car reminds everyone to show their appreciation and send some well-deserved cheer to our nation’s military families.”

Cheerios will also send extra “Cheer” to all military families by donating $1 to the USO for each postcard received from specially marked packages. To kick off the campaign, Cheerios has already donated $150,000 to the USO, and will donate up to an additional $100,000 based upon the number of postcards received through November 30, 2012. The donation will go towards USO programs that help connect families with their loved ones while deployed.

“It’s going to be great to see the ‘send Cheer’ car hit the track at Phoenix International Raceway,” said Frank Thorp, senior vice president marketing and communications for the USO. “Clint Bowyer will be carrying a message that shows military families that America supports them. The fact that that message will be delivered on Veterans Day Weekend, makes it all the more special. The USO is proud to partner with Cheerios on this campaign and thankful to Cheerios for bringing our local military families to the track as their guests. I know it will be a very special day for them and give us a chance to show our gratitude for their dedication and sacrifice.”

Race fans will also be able to send thanks and encouragement at Phoenix International Raceway by visiting the “Cheer” display located outside the track throughout the entire race weekend. You can fill out a postcard and have it sent to military families by the USO.

The USO is a private, non-profit organization, not a government agency. We rely on the generosity of our volunteers and donors. In addition to individual donors and corporate sponsors, the USO is supported by President’s Circle Partners: American Airlines and TriWest Heathcare Alliance and Worldwide Strategic Partners: AT&T Inc., BAE Systems, The Boeing Company, Clear Channel Communications, The Coca-Cola Company, Lockheed Martin, Microsoft Corporation, Northrop Grumman Corporation and Procter & Gamble. We are also supported through the United Way and Combined Federal Campaign (CFC-11381). To join us in this patriotic mission, and to learn more about the USO, please visit http://www.uso.org.