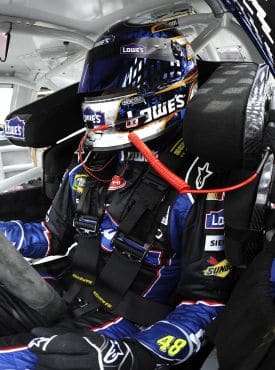 When a young Jimmie Johnson burst onto the Sprint Cup scene in the fall of 2001, he was given one of the most coveted rides in the sport: a brand-new Hendrick Motorsports team, co-owned by Jeff Gordon, in an organization that had won five championships since 1995. When Gordon hand-picked Johnson, a lot of people were surprised; though Johnson had top-10 points finishes in the then-Busch Series in 2000 and 2001, he only had one win and there was nothing earth-shattering about it.

When the team chose Chad Knaus to call the shots as crew chief, it raised a few more eyebrows. Knaus had been a member of Gordon’s title-winning team, but hadn’t exactly turned heads as head wrench at Melling Racing with driver Stacy Compton; in fact his claim to fame was that he once tried to drive the car himself in a test session when he had trouble interpreting Compton’s problem…and promptly wrecked the car. So, when the pair was handed the keys to what was expected to be a top team, people openly questioned the wisdom of the move. When Johnson finished 37th in his Cup debut in Charlotte, it just added fuel to the fire.

For all the credit Chad Knaus has received for the No. 48 team’s remarkable run, there’s an argument to be made that the driver behind the wheel has also made a huge contribution.

The thing is, the combination worked. Brilliantly, in fact; since his rookie campaign in 2002, Johnson has won 55 races and five championships. His win total ranks second among active drivers and eighth among all drivers. Only Richard Petty and Dale Earnhardt have more championship titles. And Knaus has been there for it all, save a few races while he was serving suspensions. Johnson and Knaus have the longest-running driver-crew chief team in the Cup garage.

Everyone knows that good communication between driver and crew chief is one huge key to winning races. The right adjustments are crucial to success as the racetrack changes, and in order to stay on top, the driver has to be able to relay exactly what the car is doing to the man on top of the pit box, who must then translate what he says into changes that will make the car handle better so the laps can be even faster. Some pairs are better than others, and Johnson and Knaus have been one of the best. In fact, many credit Knaus for the majority of Johnson’s successes. He’s an innovator, a mechanical genius, and he makes the cars so good that anybody could win in them. Or so the story goes.

And that was an easy trap to fall into; after all, Johnson had wins in everything he ever raced, but not in the numbers he’s enjoyed in the Cup Series. His claim to fame in the Nationwide (then Busch) ranks wasn’t even his lone win; it was a spectacular wreck at Watkins Glen that still makes the highlight reels every year. So, if Johnson was good, but not great, Knaus must have been the reason that he suddenly _was_ great. It was an easy conclusion to jump to. And a lot of people bought in.

But if Knaus carried Johnson for nearly ten seasons, did the tables turn in 2011? Or was the perception backwards to begin with?

There is no doubt that Knaus is a huge talent on top of the pit box. His ability to make the correct adjustments throughout a race, no matter what the track did, certainly helped Johnson behind the wheel. But as 2011 rolled on, there were enough chinks in the armor to make you wonder what the armor was made of in the first place. For Johnson’s first couple of titles, the pit crew was flawless. There was complete trust in them from both Johnson and Knaus, even though there was some turnover.

That changed drastically late in 2010, where Knaus made the decision to swap crews completely late in the Chase. It worked; the team performed well enough for a fifth straight title, but Knaus was never able to put a team together to his satisfaction for 2011. The team literally held tryouts each week for the over-the-wall men. It didn’t work, and by midsummer it was obvious that there was little trust between either Johnson or Knaus of the pit crew. Johnson lost spots on pit road every single week, and still Knaus didn’t name a permanent crew. It was so bad at New Hampshire in July that even Knaus admitted on the team radio that, “this pit crew f***ing sucks.”

And while the pit crew’s performance isn’t directly Knaus’ fault, the crew chief is responsible for selecting a crew who can get it done, making it clear that he trusts them, and for making the driver trust them. And Knaus never did. Even at Martinsville last weekend, the lack of trust was apparent: Knaus elected to leave Johnson on the track when a caution flew with 41 laps to go, despite the fact that fresh tires had given cars an advantage all day long. Everyone behind Johnson pitted for tires, and while Johnson drove masterfully, he didn’t have enough left to hold off Tony Stewart on the final restart.

After the race, Johnson said, simply, “I didn’t get it done.”

Johnson was too hard on himself. While it would have been a non-issue had the final caution not flown, not pitting his driver, who was leading the race and with a solid pit crew should have left pit road in the top two, was Knaus’ mistake. Whether it was to keep track position or because he didn’t trust the crew to preserve the lead is pure speculation. The fact is, Knaus made the call, and it very possibly cost Johnson the win.

And it’s not the first bad call Knaus has made this year. Martinsville was one of the few times Knaus _did_ go for track position over tires, and at many tracks, with the current tire compounds, that was a huge mistake, and one that Knaus kept right on making. A fuel miscalculation at Chicago put Johnson in a hole right from the start in the Chase. The car was never competitive at New Hampshire, either, and even as Johnson finished second, he clearly didn’t have the car to win, which had also been the case at Atlanta, where despite Johnson driving it as hard as he could without wrecking, it just wasn’t enough.

The conservative approach coupled with a car that just didn’t run like it should have at Charlotte left Johnson mired in traffic for most of the night. Johnson ended up wrecking hard trying to make up ground. At Talladega, Knaus pushed Johnson and his drafting partner, Dale Earnhardt, Jr., to hang at the back of the pack for most of the day, despite the fact that they had won at Talladega in April employing a less conservative strategy. The call cost Johnson and Earnhardt a chance at the win, and most likely ultimately lost Johnson a sixth title as well.

One thing Johnson and Knaus were always among the best at was adjusting their strategy throughout a race, being conservative when they could but taking chances when they had to. That didn’t happen much this year, and the result was a lackluster season.

It’s not that Knaus isn’t getting feedback from Johnson; he is. Johnson is masterful at describing the car’s behavior throughout a race. He is meticulous in his description of each part of each corner-each _part_ of each part of each corner. He gives so much information that the crew has many ideas to work with and adjust on. He rarely gets frustrated, and even when he does, he doesn’t let that distract him from getting the correct information across. He remembers how the car handled at any given point at every given race at any given track, and he uses that to communicate his car to the pit box. Johnson is much, much more skilled than he is sometimes given credit for, and he has shown that throughout his career, only to have it too often mistaken for Knaus’ brilliance.

Perhaps Knaus is reluctant to change the formula that worked for his team for so long and with so much success. But the game changed this year-track position often proved more important than fresh rubber or a changed racecar, and Knaus too often didn’t change with it. And keeping up with every change-from tires to racecars, to tracks to every other subtlety of the game-is the only thing that will keep success coming.

For the better part of ten years, people wondered if it was Chad Knaus carrying Jimmie Johnson to success beyond anyone’s wildest expectations. Now, perhaps it’s time to ask if maybe it’s been the other way around.