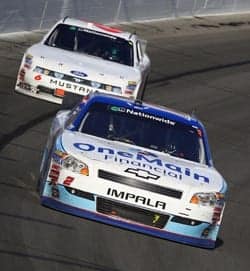 For all the steps forward the Nationwide Series has enjoyed in 2011, be it watching series regulars win four races or the championship being limited to Nationwide Series regulars (this will mark the first season since 2005 a Cup regular hasn’t contested the full NNS schedule), it’s hard to enjoy the final few races of this season. And that’s a damn shame, seeing as how Ricky Stenhouse Jr. and Elliott Sadler are in the midst of the tightest championship battle this series has seen since that same 2005 season that saw Clint Bowyer stalk Martin Truex Jr., making up ground on the eventual champ over the final month of the season before falling short at Homestead.

Problem is, for all the promise the final three races of the 2011 campaign have to produce a compelling trophy run, it’s harder to appreciate the eventual title winner…because the 2012 season is full of uncertainty to a degree that hasn’t been seen in recent memory.

Both Ricky Stenhouse Jr. and Elliott Sadler have had stellar 2011 seasons, but as it stands neither will be where they were hoping to be in 2012.

Start with the drivers battling it out. Ricky Stenhouse Jr. has been been a powerhouse all season long in the No. 6 car, winning twice and proving one of the few in the field able to keep up with Kyle Busch and Carl Edwards. Yet, despite being the points leader and a consistent race winner, Stenhouse has still not found a full-time backer, does not have one for 2012, and is alongside Trevor Bayne, Matt Kenseth and David Ragan as wondering what exactly Roush Fenway Racing is going to look like. The only Nationwide car Roush has actually had backing for all season long has been Edwards, and his primary sponsor for that car in Fastenal is off to the Cup ranks next year.

Best case? Roush brings both Bayne and Stenhouse back to Nationwide racing next year, sponsored or not. That means the team has contracted, and with Edwards only running a partial schedule next year, the organization’s best source of information isn’t going to be there in the capacity it was this year. Worst case? Roush may be forced to ration races, both Cup and Nationwide, between two highly talented prospects that each have been a credit to the RFR team on and off the track in 2011.

As for Elliott Sadler, things look a bit better, with Kevin Harvick, Incorporated’s Nationwide program merging into the Richard Childress Racing camp next year. With a teammate coming in Truck Series title contender Austin Dillon and RCR’s long history of success in Nationwide competition, Sadler’s No. 2 car is seemingly secure sponsorship-wise and may not even miss a beat in transition.

Still, that’s not the result Sadler was looking for. It’s no secret this step down was meant to be a stepping stone to get the Virginia-native and Cup veteran back onto the big stage. Yet, despite a strong showing in 2011, Sadler has still not found victory lane, and has been absent from the Cup rumor mill through all of silly season.

A development driver that might not even get to keep that process going, and a longtime veteran that’s likely going to be stuck in AAA, with or without a title on the mantle. And it’s not just the drivers facing this kind of ambiguity as to what next year is going to look like.

Because with the Roush Fenway Racings of the world struggling to find sponsorship, it’s not rocket science to figure that the teams lower on the food chain are fighting a nearly impossible fight for dollars. Just look at the entry list for Texas this weekend; 48 cars on the docket, and 27 of them are either unsponsored or featuring backing that’s not currently coming back next year. Do the math…that’s 56% of the field.

If anything, it means the start of the 2012 season will likely see the Nationwide Series rife with operations trying to stretch it the first few weeks, trying to steal a good run and get a sponsor to notice. A good story and fun to watch, but not a reliable means to develop a racing tour.

And while that trend’s nothing new amongst race teams, especially at the lower levels of stock car racing, it’s spread to race promotion as well. See NASCAR’s decision to return to Montreal in 2012. The Montreal Gazette reported Thursday that the group putting on the event at the famed Circuit Gilles Villeneuve stated “we signed the agreement [with NASCAR] to continue the race knowing we didn’t have any public funding.”

That’s right; the government dollars that have aided in putting on a significant sporting event (crowds of 70,000+ have routinely turned out for this race) are not secured. Yet NASCAR has scheduled a race in a foreign country nonetheless for the Nationwide ranks.

What does it say that Montreal, for all the success the race has proven to be in terms of on-track action and putting butts in the stands, that officials refuse to put up the bread to help host a Nationwide race? And what does it say about the state of NASCAR’s AAA, a series that the sanctioning body never misses a chance to dub the “second biggest” form of motorsports in the country, that a race date goes to a promoter that has yet to figure out just how they’re going to pay for hosting costs? A series that will now for 27 of 33 races be running as companion events to the Cup ranks?

The 2011 Nationwide Series campaign is going to have a suspenseful finish. What’s after that is anybody’s guess.