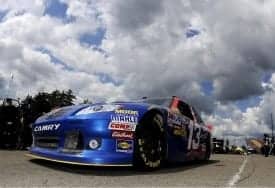 It’s hard not to be able to run every race, but it’s definitely good to be there and to learn. We didn’t run the whole race at Pocono, but we can get a good idea of what the tire’s going to do and make some changes to try to put ourselves in a better position for when we go back and run the whole event.

Watkins Glen was good. Unfortunately, we blew a motor in practice. We actually had a pretty good car. It drove pretty well and was fairly fast, but we had to start in the back because we blew that motor. So then on the start, I had to start all the way in the back and there were a couple of guys in front of us that decided they weren’t going to go on the start just to try to stay out of the mess going into Turn 1, and when they did, I had to avoid hitting them when they slowed down. We ended up getting a penalty for getting out of line. I pulled out of line to avoid hitting them, but we had to come down pit road and do a pass-through.

Even with a pit road penalty, Casey Mears salvaged a decent day turning left and right at the Glen.

Thankfully, on a road course the lap times are long enough that you can come down and do a pass-through and not lose a lap. But it put us out of sequence. We ended up being out of sequence all day. Fortunately, we came home okay, we ended up 20th, but I think we could have had a much better day if we wouldn’t have had that penalty, but that’s the way it goes. It still ended up being a relatively good day for us.

I think when we go back to Michigan, we’ll be prepared (in spite of not running the full race). That car that we took to Michigan was the car that we took to Indy as well. It’s actually the newest car that we’ve built. We’re actually working on some other ones right now. It’s good to see that the ideas and the thing that we’ve done have definitely improved the way that we’re building the cars. The ideas that we have to get better are going in the right direction. It’s good to have almost a full year now of myself and Bootie working together. We’re starting to get some patterns and to really be able to learn what we have to do to make these cars better. It’s fun to see our hard work going in the right direction.

We’re very excited for Bristol this week. We had a good car last time; we qualified decent and we were running really well. We still don’t know if it was an electrical issue or a fuel issue, but anyway, the motor kept dying on us. It would shut off completely, and I’d come down pit road and then it would kind of magically fix itself and we’d go back out and had the issue again. Unfortunately we dealt with that the first time we were here, but because of how we ran, we’re really excited about it. This is one of those racetracks where it kind of levels out the playing field a little more than these places that are big, aerodynamic tracks, big horsepower tracks; at those kinds of places we’re a little bit more challenged.

But when we come to Bristol, Martinsville, places like that, I feel it really levels out the playing field a little bit. So we’re excited. We’ve made some progress, and we feel like we’re bringing a better car back here than the last time, so we’re excited to get going and see where we stand. My intro song is Nickelback’s Burn it to the Ground.

I’m always spending time with my family. We do the family thing during the week. It’s all been good, but we’re right in the middle of the race season, so we’re busy! That’s been the majority of our time. I’m looking forward to the next few weeks; we’ve got a pretty good string of races coming up that we’re getting ready to run. Geico is the title sponsor of the Chicago race, so that’s definitely a big one for us. We’re excited to get there and have a good run for those guys.