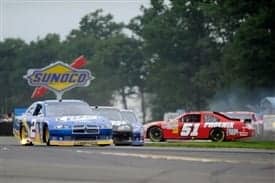 *ONE: Attacking Drivers in Their Cars Has to Stop*

I didn’t start following this sport until 2003, but even in my first season of racing I saw my first major instance of a driver, angry at another driver, not even waiting until their opponent got out of the race car before going after them. It’s hard to forget the whole episode of Jimmy Spencer reportedly wailing on Kurt Busch at Michigan, Busch still in his driver’s seat. Then there was Tony Stewart going after Brian Vickers at the summer race in Daytona in 2004, Kyle Busch egging Steve Wallace on in a Nationwide race at Richmond to a point that Wallace grabbed his facemask, and now this weekend fans in Montreal saw the same Wallace have his hair pulled by Pastrana-Waltrip Racing crew chief post-race in the pits.

Now, of all the incidents, the most recent one at Montreal was by far the most tame and tepid. But it’s still an example of a weak, passive means of expressing anger at fellow competitors, and sadly it’s something that seems to be pervasive among a great number of competitors across the garage area.

Sure, it’s an easy way to make sure that a driver isn’t going to fight back. After all, there’s few places anywhere in sports more restrained and constricted than the cockpit of a race car. But come on, is that really the point of confronting a driver post-race? Making sure they won’t be able to retaliate? Is that really what today’s competitors have come to?

There’s no need to encourage post-race brawling, loudmouthing, etc. every weekend and turning a great sport into a sham. It shouldn’t be too much to ask that those angry enough, frustrated enough, fired up enough to confront their fellow competitors do it with a hint of a backbone. If it is, well, thank God football is back.

*TWO: Boris Said Wrong On the Track, Right Off of It*

Even if Boris Said wasn’t conclusively at fault for triggering the violent David Ragan/David Reutimann wreck a week back at Watkins Glen, there’s no doubting that in recent years he’s been the equivalent of a rogue bowling ball on the Sprint Cup Series’ road courses. That being said, in the volley of words traded between he and Greg Biffle in the days since the Glen, it’s hard to find fault with his words.

Sure, calling a fellow competitor a jackass isn’t going to accomplish much. But going further, Said was just the latest to call to attention the ever-present sense of entitlement today’s Cup stars seem to have on the track and to their ability to race unimpeded. It’s hard to forget the Nationwide Series of 2008, be it Denny Hamlin sideswiping Brad Keselowski under caution at Charlotte and lambasting him for not knowing how to race, or for Clint Bowyer feigning outrage at David Stremme at Nashville for having the audacity to nudge the points leader under green. It’s hard to forget just how many times Jimmie Johnson has chastised a number of drivers, including de facto Hendrick teammate Ryan Newman at Homestead last season, for racing him too hard. And now, according to Said, there’s an example of Biffle questioning why Said would race aggressively when he’s not a full-time competitor.

Got a problem with Boris Said racing three-wide on a road course? Either get out of the way or trade some paint. Save the “racing too hard” comments for the TV announcers.

Michigan this weekend marked the first time Denny Hamlin took to the track with a TRD-built motor under the hood of his Camry, well premature of Joe Gibbs Racing merging their engine building operations into TRD for the 2012 campaign. Not that it did any good; even though the motor held on all day, Hamlin couldn’t keep his machine off the wall.

While Hamlin’s poor performance at Michigan did little to help boost the thought that his No. 11 team would be contenders, or even competitors, in this year’s Chase, teammate Kyle Busch is now in line for quite the boost…and not just because Rowdy won his fourth race of the season. With Hamlin running TRD powerplants now, the remaining engine staff at Joe Gibbs Racing have just one horse they can go out on top with, and that’s the No. 18.

With Joey Logano’s season all but over in a few weeks, there’s every reason for the JGR engine staff to throw every single thing they’ve got, both in terms of effort and skill, into Kyle Busch’s motors. It’s not like JGR has been down on horsepower in 2011. Besides, who wouldn’t be motivated after having one of the drivers they’ve built motors for the past five years kick them to the curb? Hamlin’s not going to win a Cup in 2011…but he may well be part of the reason JGR has a real shot at it, nonetheless.

*FOUR: There Is a Correlation Between Brad K’s Success and His Injury*

It has nothing to do with his motivation. Rather, notice that in the time since his testing crash at Road Atlanta, Keselowski has focused solely on his Cup car, making no starts in the Nationwide ranks during that stretch.

There’s no real control group to look at here, as Keselowski has been a full-time Nationwide Series racer during the entire extent of his Cup career. However, there’s something to be said about how Keselowski’s hottest career stretch in a Cup car has come on the heels of getting out of the No. 22 car.

As good as the No. 22 car has been in NASCAR’s AAA in 2011, it has still been nowhere near as good as it was last season when Keselowski was running away with the series crown. The Discount Tire car has seldom been a rocket right off the truck this year, and that means more work adjusting the machine, more thought spent trying to get it right. Now, with that ride off his mind, suddenly Keselowski has become the Cup driver that everyone and their mother expected him to be when he stormed to victory at Talladega back in 2009.

The biggest barrier between NASCAR racing and the track NASCAR never should have left is suddenly about to disappear. It’s a damn shame that it’s taken the loss of Gateway, Memphis, and Lucas Oil Raceway to seemingly get the ball rolling, but returning the Rock to Nationwide or Truck competition next year would go a very long way in reversing an ugly tide.

I don’t care how much money Rockingham makes off of testing fees from the Little Rock oval, there’s no way what has become a glorified late model track is going to invest in a mile of SAFER barriers without an assurance that a more significant–and significantly paying–race was coming to the docket.

Here’s hoping NASCAR has the balls ARCA did and schedules whatever the race is as a 500 kilometer endurance event.