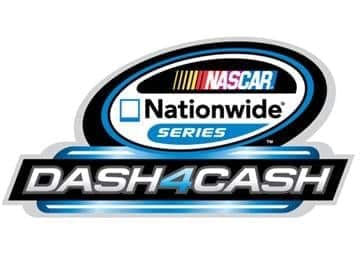 For Nationwide Insurance, now in their fourth year of a seven-year sponsorship, the Dash 4 Cash is reminiscent of both the “Winston Million” and “No Bull 5” as well as the Sprint Summer Showdown and the program is another great example of how a sponsor can integrate seamlessly into the sport and bring added value over and above all the other already existing initiatives.

The Nationwide Series’ Dash4Cash program continues to be one of the sport’s most popular promotions.

Here’s how the program works: Starting with the July 1 Nationwide race at Daytona, the top four drivers in the series standings will be eligible for a $100,000 bonus, to be claimed by the highest-finishing driver among those four. Eligibility requirements change for the subsequent races at Iowa (Aug. 6), Richmond (Sept. 9) and Charlotte (Oct. 14). The winner of the previous Dash 4 Cash plus the three highest-finishing championship-eligible Nationwide drivers in the previous Dash 4 Cash race will compete for the money in the next Dash 4 Cash event. Should one driver win the first three Dash 4 Cash awards, that driver can earn an extra $600,000 by winning the Charlotte race, bringing the total available to $1 million.

“The enhancements to the Dash 4 Cash program will take the action on the track to a whole new level this year,” said Jim McCoy, Nationwide’s director of strategic sponsorships when announcing the program back in May. “We’re thrilled to create a race within the race that gives fans another reason to tune into the NASCAR Nationwide Series.”

“Since its inception, the program has brought increased notoriety to the series and, more importantly, the teams and drivers competing for the series title,” added NASCAR Senior Vice President Steve O’Donnell when the program was announced earlier this year. “We believe the big bonuses for the select ‘Dash 4 Cash’ races, along with a guaranteed winner each week, will certainly continue to drive awareness for the series while creating some very exciting storylines and finishes along the way.”

At this stage, we’re currently halfway through the 2011 Dash 4 Cash and in both of the qualifying races so far, the driver of the No. 32 Dollar General car, Reed Sorenson, has been the highest place finisher keeping him on track for the $1 million prize. Said Sorenson post Iowa: “Week in and week out, these Nationwide race finishes prove that you just have no idea what is going to happen at the end. We continue to put ourselves in a position for good finishes at the end, even though we may struggle to get there. It was awesome to be able to take home that Dash 4 Cash award again. I’m hopeful we can keep that streak alive in the next race at Richmond.”

_This article is a sponsored advertisement. All rights reserved._