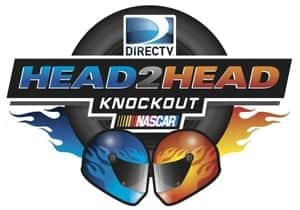 Looks like it’s that time of year once again. The time where fans get the chance to put their “bracketology” knowledge to work as they pit competitor against competitor and team versus team.

Once again, each Monday morning, thousands will be gathered around the water cooler to see whose bracket survived the madness that transpired over the weekend. No, this isn’t March and brackets will not include names such as Duke and Gonzaga. Instead, the matchups will feature Jeff Gordon vs. Jeff Burton and Tony Stewart vs. Joey Logano, among others. That’s because this weekend marks the start of the second annual DIRECTV Head2Head Knockout Competition.

This year, DIRECTV and ESPN have teamed up to offer fans a chance to win $1 million if they can pick the perfect bracket. This weekend’s Good Sam RV Insurance 500 at Pocono will kick off the first of four rounds, which will conclude with the “Fastest Four” battling for bragging rights at the Irwin Tools Night Race at Bristol Motor Speedway Aug. 27.

Fans can go to www.directv.com/nascar for further information and to enter their brackets, which must be submitted by 12:30 p.m. ET this Sunday, Aug. 7.

Participants will be able to choose which of the 32 drivers in round one will make it the furthest through the next four weeks. There is no room for error as the tournament features a single-elimination format; if a driver does not beat his opponent in a round, he is out of the competition. Simple as that.

A perfect bracket isn’t the only way the fans can win, though. The participant who accumulates the most points will win a brand new truck from the manufacturer of the winning driver, while others have a chance to win a Panasonic 3D Price Package. And fans aren’t the only ones who benefit; DIRECTV will be donating a total of $400,000 to driver charities throughout the next month.

Providing NASCAR fans with the opportunity to get involved with their favorite sport while helping non-profit organizations is just the latest way that the satellite provider has embedded itself in America’s top form of racing.

DIRECTV has been involved in the sport for several years through offering NASCAR HotPass, an exclusive broadcast that provides live footage of the race from the driver’s perspective in HD. All DIRECTV subscribers receive NASCAR HotPass at no extra charge in their base TV package.

In 2010, DIRECTV stepped up their involvement by introducing the inaugural Head2Head Knockout, in which Denny Hamlin beat out his Fastest Four competitors Kevin Harvick, Martin Truex Jr. and Clint Bowyer. In route to his victory, the driver of the No. 11 Toyota received $285,000 for the Danny Hamlin Foundation. The competition was such a success that executives at DIRECTV determined an encore was necessary.

“Coming off last year’s successful Head2Head campaign, we are thrilled to team up with ESPN and NASCAR to create a competition that dials up the rivalries among drivers and also helps a number of important charities around the country,” said Jon Gieselman, senior vice president of Marketing and Direct Sales for DIRECTV. “The bracket style, single elimination competition brings out the best in everyone, especially with bragging rights on the line.”

Those in NASCAR’s office could not agree more. “At NASCAR, we are always looking for ways to collaborate with our official partners to engage our avid, loyal fans and this program is a good example,” said Norris Scott, NASCAR Vice President of Partnership Marketing and Business Solutions.

“DIRECTV understands how to create exciting initiatives that help fuel fans’ passion for our sport, while also supporting some of our drivers’ charities – many of which have been impacted over the last several years by a slow economy. Providing fans with a chance to compete for great prizes while directing funds to the non-profit sector is truly a win-win.”

Those thinking that the competition will be a cake walk should think again. Of the 32 drivers, 12 participated in the 2010 Sprint Cup Chase. The first around features intriguing matchups such as Brickyard 400 winner Paul Menard vs. Juan Pablo Montoya, who is fighting for his Chase life.

Another battle in the “Turn 1” region puts five-time champion Jimmie Johnson against Regan Smith, who has developed a habit of upsetting the competition in 2011 courtesy a Southern 500 victory at Darlington. So for fans, these picks are trickier than ever; whoever wins the million dollar prize or the brand new truck will truly have earned it.

DIRECTV has provided NASCAR fans a creative way to get involved with the sport they love and create some “August Madness” of their own. By the time Aug. 27 arrives, one driver, a group of clever fans and many charities will certainly be much better off thanks to the Head2Head Knockout competition.

This article is a sponsored advertisement. All rights reserved.

Tony Lumbis has headed the Marketing Department for Frontstretch since 2008. Responsible for managing our advertising portfolio, he deals with our clients directly, closing deals while helping promote the site’s continued growth both inside and outside the racing community through social media and traditional outlets. Tony is based outside Philadelphia.